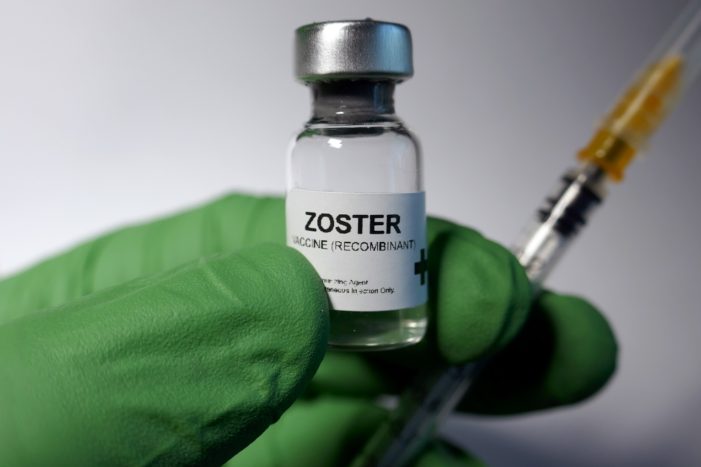 The new herpes zoster (shingles) vaccine, Shingrix, is produced by GlaxoSmithKline (GSK) and is being marketed as the welcome and best answer to preventing a painful bout with shingles. GSK’s Shingrix vaccine is in head to head competition with Merck’s shingles vaccine, Zostavax, licensed in 2006. The relentless advertising for Shingrix is difficult to avoid: It is blared over grocery store speakers, has taken the place of muzak on pharmacy or doctors’ office hold lines, and is aggressively being promoted by nearly the entire medical establishment.

Shingles is caused by reactivation of the chickenpox virus (varicella zoster) in a person who has previously had either natural chickenpox or has received the vaccine. Children or adults who get shingles suffer with a painful, blistering rash, usually on one side of the body. The rash and blisters usually last for two or three weeks and the nerve pain may persist for months or even years.1 The condition usually occurs in adults over age 50, which is why public health officials and vaccine manufacturers target that population for marketing shingles vaccines. However, shingles has also been diagnosed more frequently in children since the chickenpox vaccine was licensed and recommended for all healthy children in 1995.2

Since its approval in October of 2017, Shingrix vaccine has overshadowed the older Zostavax vaccine produced by Merck, which had been the only shingles vaccine available in the U.S. for more than a decade. Shingrix is reported to be up to 90 percent effective in preventing the development of shingles, compared to an estimated 50 percent effectiveness for Zostavax.3

Even among the vaccine’s most ardent supporters, however, the news about Shingrix hasn’t all been positive. In June, the Centers for Disease Control and Prevention (CDC) published a report discussing a significant number of administrative errors and serious injuries associated with the new shingles vaccine.4 Within the first four months of being on the market, the Vaccine Adverse Event Reporting System (VAERS) received 155 adverse event reports linked to Shingrix.

Several of the errors were attributable to vaccine administrators confusing the two shingles vaccines, which actually differ in significant ways. Merck’s Zostavax is a live attenuated vaccine (ZVL) that is given once as a single shallow injection, just under the skin (subcutaneous injection). GlaxoSmithKline’s Shingrix is a recombinant vaccine (RZV) that must be reconstituted prior to injection and is administered deeper into the muscle (intramuscular injection). Shingrix is given twice, with the second dose given between two and six months after the first one.

The reported errors associated with Shingrix included administration via the subcutaneous route, a mistake that usually caused significant injection site reactions including pain, severe itching (pruritis), and redness (erythema). Other errors reported were administering the vaccine to patients younger than 50, giving out the wrong vaccine information sheet (VIS), administering just the vaccine’s novel adjuvant without reconstituting it with the actual vaccine antigen, and mistakenly giving the shingles vaccine to a person who was supposed to get chickenpox (varicella zoster) vaccine.

The novel vaccine adjuvant QS-21 Stimulon is a purified extract from the bark of the Quillaja saponaria vergreen, otherwise known as the soap bark tree.5 QS-21 Stimulon is an “immune potent” adjuvant designed to “turbocharge vaccines by strengthening and broadening immune responses (both T cell and antibody mediated) to a vaccine’s antigens.” The new adjuvant is currently under study for use in immune therapies against cancer, HIV, and malaria.6

Shingrix vaccine’s novel adjuvant system, AS01B, not only contains QS-21 Stimulon but also MPL (monophosphyoryl lipid a), an immune-stimulating fat. Shingrix ingredients (per dose) include 50 mcg of the QS-21 and 50 mcg of 3-O-desacyl-4’- monophosphoryl lipid A (MPL) from Salmonella minnesota, as well as 50 mcg of its antigen: recombinant glycoprotein E (gE), along with 20 mg of sucrose (as stabilizer), 4.385 mg of sodium chloride, 1 mg of DOPC, 0.54 mg of potassium dihydrogen phosphate, 0.25 mg of cholesterol, 0.160 mg of sodium dihydrogen phosphate dihydrate, 0.15 mg of disodium phosphate anhydrous, 0.116 mg of dipotassium phosphate, and 0.08 mg of polysorbate 80.7

Even when it is administered according to protocol, the Shingrix vaccine is very reactive. The vaccine’s side effects are known to be more severe than those associated with Zostavax, but public health officials insist the vaccine’s benefits are worth the risk of “skin rash, joint pain, flu-like symptoms, headaches and fatigue” commonly experienced by those who get it.8 Kathleen Dooling, MD of the CDC’s Division of Viral Diseases admitted that more than 70 percent of patients had pain and, “About one in six people experienced side effects so severe that it actually prevented their normal activities.”

In fact, the side effects of Shingrix are so severe that the vaccine’s promoters are concerned that many people will not be willing to go back for the second dose of the vaccine.

After participating in a CDC funded study of the effect of widespread use of chickenpox vaccine in California between 1995 and 2002, researcher Gary Goldman, PhD, published a major paper in 2005 warning that the decline in incidence of chickenpox would lead to an increase in children developing shingles.9

In 2003, Goldman predicted that “a large-scale increase in shingles incidence would soon become manifest among adults—a group more susceptible to serious complications.”10

Referring to the “solution” proposed by vaccine manufacturers at the time—to license a booster “shingles” vaccine to substitute for the natural boost in immunity that occurred when people were exposed to wild-type chickenpox in the environment—Goldman said, “This will likely lead to endless disease-and-cure cycles.”

Questions Remain About the Rising Incidence of Shingles

The incidence of shingles is much higher than it used to be, and it is being seen in younger people, though there is disagreement about the reasons for the increase. Many scientists have suggested that mass vaccination of children with the varicella zoster (chickenpox) vaccine has reduced the presence of the chickenpox virus in the environment, thereby eliminating the natural immune system boost people used to get from exposure to the virus.12 At one point it was thought to provide 20 years of protection, though more current thinking puts the effect at more like two years.12

The current mainstream medical message denies that the chickenpox vaccine is responsible for the observed increase in shingles,13 but others suggest that the knowledge has been deliberately suppressed.14

Clarification: In response to a comment by one of our readers, the word “muzak” in the first paragraph of this article is not misspelled. It was not meant to be “music,” but rather a reference to the background music often played in retail stores, elevators and other public locations.