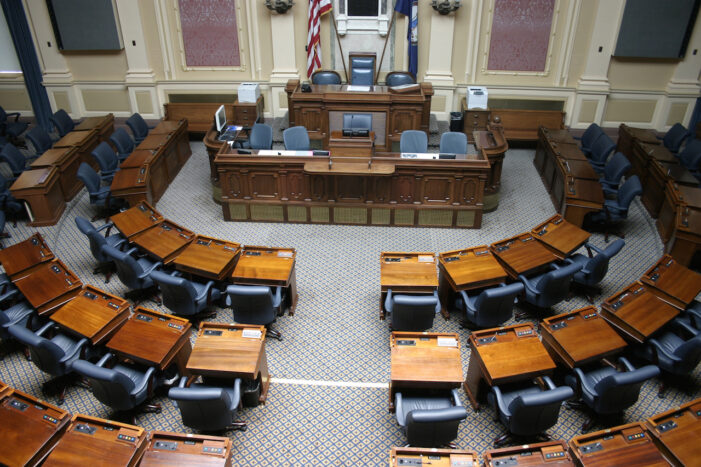 In the 2020 Legislative session, the Virginia Legislature passed H.B.1090, a bill that amended a law requiring children attending public and private schools in the state to receive vaccines (§ 32.1-46. Immunization of patients against certain diseases).1 Virginia Delegate Patrick Hope (D-Arlington) was the lead sponsor of H.B. 1090 introduced on Jan. 8, 2020, which proposed to automatically mandate that children enrolled in daycare or school receive all current and future vaccines recommended by the federal Advisory Committee on Immunization Practices (ACIP).

The final bill, passed by the Senate in March, granted Governor-appointed members of the Virginia Board of Health the authority to add federally recommended vaccines to the schedule required for school attendance with the exception of the annual influenza vaccination. The bill included an exemption from the requirements of Article 2 of the Administrative Process Act (§ 2.2-4006 et seq. of the Code of Virginia), effectively blocking Virginia citizens and elected legislators from participating in the decision-making process that creates new vaccine mandates for children.

Under the U.S. Constitution, duly elected representatives in state legislatures have authority for making public health laws for state residents. In handing the power to make vaccine laws to unelected members of a federal advisory committee and state Board of Health, the Virginia legislature has abdicated responsibility and accountability to constituents by cutting out elected representatives and the voters who elected them from the vaccine law making process.2 Although the new law provides for a 60-day public comment period after the Board of Health issues a Notice of Intended Regulatory Action to add a new vaccine to the required list for daycare and school attendance, the legislature will never again hold a public hearing where citizens can testify for or against the addition of a new vaccine mandate for children.

Under the new law, the state Board of Health composed of physicians and representatives of medical trade and pharmaceutical-related associations like the Medical Society of Virginia, Virginia Pharmacists Association, Virginia Nurses’ Association,3 4 are expected to endorse vaccine use recommendations issued by members of the ACIP appointed by the U.S. Centers for Disease Control and Prevention (CDC). The new law automatically adds up to 10 more doses of five vaccines for daycare and school children, including vaccines that the Virginia legislature previously voted against adding to the schedule, such as the very expensive meningococcal vaccine and HPV vaccine for boys.5

H.B. 1090, as amended, was passed during a special session held by the state legislature on Apr. 22, 2020 during the COVID-19 lockdown. Virginia Governor Ralph Northam, MD signed the bill into law with an effective date of July 1, 2021.6

H.B. 1090 was first heard in the House Health, Welfare and Institutions Sub-Committee on Jan. 21, when citizens, including parents, grandparents, nurses, doctors and scientists lined up to speak in opposition to the bill. After the committee Chairman announced that the amount of time allocated for all those speaking in opposition to the bill would be limited to 10 minutes in total, the majority of people waiting to testify in opposition to the bill were denied the opportunity to speak. Despite driving and waiting in long lines for hours, Virginia voters were shut out of the law-making process contrary to state legislative policy which states that, “meetings of the General Assembly are required by law to be open to the public. Citizen testimony in committee and subcommittee is encouraged.”7

The committee majority placed no time restrictions on those speaking in favor of the bill that would automatically mandate every vaccine the CDC recommends for all children, currently and in the future.

After a limited number of citizens spoke out against the bill, including those who described how their once healthy children regressed into chronic poor health or died after doctors administered CDC recommended vaccines to them, Delegate Dawn Adams (D-68th District), a PhD nurse practitioner stated matter-of-factly:

But I feel like it is also very important to hear this and I know, it’s hard when you are a parent. Vaccinations are for the individual, they are, but they are also for the community and we live in communities. And I understand that sometimes [with] this medical availability [of vaccinations] that we have to do the best job we have for the most people [and this] sometimes results in unintended consequences, and that is a tragedy and [an] across-the-board reality in medical care.

There was an audible gasp in the room after Adam’s remark. It was a slap in the face to every parent who traveled to Richmond that day on behalf of a child who died after vaccination or whose children are suffering every day with vaccine injuries that will never go away. Effectively decreeing that the sacrifice of some children is necessary to implement the proposed new law, the committee members moved on to other bills. However, no one who attended the hearing or watched it that day will forget the cold admission  by those voting for the bill that some children will be harmed by a one-size-fits-all vaccination law that requires parents to choose between risking their children’s lives or giving them a school education.

Limited or No Testimony Allowed

After passing out of the House Health Committee on Jan. 28, the bill moved to the House Appropriations Subcommittee. Testimony was not limited for those in favor of the bill, while those opposed to the bill were again allowed only 10 minutes in total to speak and no testimony was permitted from individuals who had spoken at the first hearing.

As the bill moved through the other committees in the House, testimony was only allowed from supporters of the bill, while those in opposition to the bill were denied the opportunity to speak at all.

The Senate Health Subcommittee, which allowed 10 minutes of total testimony in opposition to the bill, was the final opportunity for public to be heard. But the bill was passed by the full Health Committee, Appropriations Committee and full Senate without taking public testimony from any member of the Commonwealth who opposed the bill.

Concerned parents with their children and other concerned citizens attempted to meet with Senators, packing the Senate halls for days, in an effort to voice their opposition to the escalating numbers of vaccines being required for daycare and school. On Mar. 2, 2020, hundreds of protestors rallied in opposition on the Capitol grounds before the bill moved onto the full Senate.

Senators For and Against Bill Debate

The full Senate debated the bill amongst themselves for approximately one hour. There were three amendments proposed and one adopted.

We had a lot of people come by our offices, and in the Capital who have been very concerned about what we are doing here. Now let me make this straight to everybody, these people are not crazy. They are not flat- earthers

These people probably know more about these vaccinations than anyone else on this floor and I mean anybody because they studied, they looked at it and they researched it. And some are genuinely frightened for the welfare of their children. For us to be pushing further and further into their parental decisions for their children not our children but their children, I think is a terrible imposition…these are some very intelligent, well educated people. I really hope that we will listen to mothers and fathers and let them decide for themselves and their families how to proceed on this vaccination route.

In contrast, Senator Dick Saslaw (D-35th District) belittled constituents who met with him to express their opposition to the bill;

There were a ton of moms who showed up all with their kids in opposition to it. Those people who spoke in favor of it were a group of various doctors representing various aspects of the medical profession. Let me repeat that, the people supporting this bill are the people who have to deal with these diseases. All of the emails and support I’ve gotten for this have come from doctors over the commonwealth and people who deal with diseases. Well, you say these people know what is best for their kids. In theory that may be right, except for the fact that they are not only putting their own kids in jeopardy but they are putting other people’s kids in jeopardy as well.

Ultimately, parents of vaccine injured children and those whose children are vulnerable to harm from vaccination were effectively told, again, that even if it is safer for your child not to be vaccinated, you must put your child in harm’s way for “the greater good” in order for your child to receive a school education.

The automatic adoption by state public health officials of all new federally recommended vaccines to the required list for children to attend school in the Commonwealth without input from citizens and elected representatives is even more concerning because COVID-19 vaccines are being fast tracked to licensure. While it normally takes 15 to 20 years to develop a vaccine, a vaccine for COVD-19 may be on the market by this September and federally recommended for use by all children and adults in 2021.9

What people don’t realize is that normally vaccine development takes many years, sometimes decades…and so trying to compress the whole vaccine process into 12 to 18 months is really unheard-of. 10

To create coronavirus vaccines, vaccine manufacturers are using recombinant DNA, messenger RNA (mRNA), nanoparticle and novel adjuvant technology, most of which has never been licensed for use in humans. For example, Moderna, Inc. in partnership with NIAID is developing a COVID-19 vaccine that will inject human cells with mRNA, usually within lipid nanoparticles, to stimulate cells in the body to become manufacturers of viral proteins. Inovio’s DNA vaccine uses electricity to deliver optimized DNA to the cells of the body.11

GSK and Sanofi are also developing an experimental COVID-19 vaccine in collaboration with the U.S. government that will combine GSK’s oil adjuvant AS03 that was included in their H1N1 influenza vaccine, Pandemrix, with the insect cell-based recombinant DNA vaccine technology used by Sanofi Pasteur in their quadrivalent influenza vaccine, FluBlok.12 GSK’s Pandemrix vaccine, which was distributed in Europe during 2009/2010, has been linked to narcolepsy, especially in children.13 14 15

Will an experimental coronavirus vaccine that was rushed to market be mandated for all Virginia school children after the CDC recommends it for every child?

Because a law was passed in 2020 that allows state public health officials to automatically add every CDC recommended vaccine to the list of vaccines required for daycare and school entry—without public hearings or a vote by elected representatives in the legislature—it appears that the answer is “yes.”

52 Responses to "Virginia Legislature Gives CDC, Board of Health Power to Mandate Vaccines for School Children"