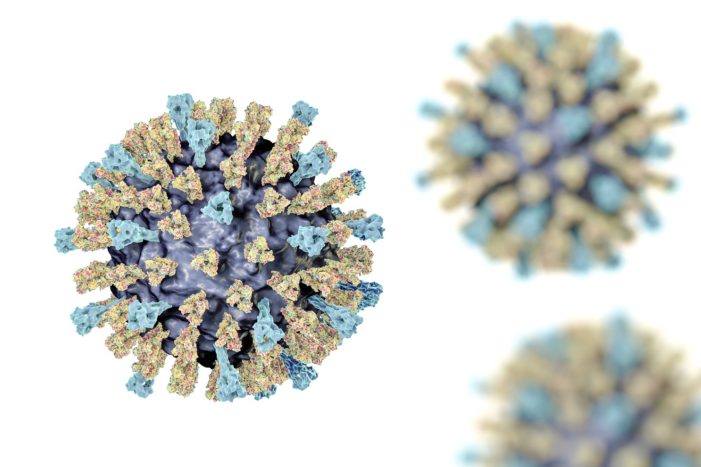 There have been at least two reported cases of children with measles in the United States this year that have turned out not to have been wild-type measles after all. The two cases involve children in Oakland County and Washtenaw County, Michigan. Both children had exhibited symptoms of measles and initially tested positive for the measles virus. However, the Michigan Department of Health and Human Services conducted additional genotype lab testing of the virus identified in the children’s blood and determined that it was actually the attenuated (weakened) vaccine strain measles virus from the MMR (measles, mumps, rubella) vaccine the children had recently received.1 2 3

In other words, the symptoms observed in the children by health officials were reactions to the MMR vaccine. The children did not have wild-type measles infections, as originally diagnosed and reported. According to a news report by the Detroit Free Press, “The MMR vaccine can sometimes cause a mild rash and fever. That, health officials say, is a vaccine reaction, not the measles, and people who’ve been immunized are not infectious after vaccination.”1

Susan Ringler Cerniglia, spokesperson for the Washtenaw County Health Department, was quoted as saying, “It [the vaccine strain virus] can give that false positive, but it can’t be transmitted and spread. You cannot get measles from the vaccine.”2

Apart from Merck’s acknowledgement of reports of measles following MMR vaccination, the reality is that vaccine strain measles is associated with receipt of the MMR vaccine, as was demonstrated by the results of the genotype testing conducted by the Michigan Department of Health and Human Services.1 2 3

It is important for doctors giving vaccines and parents of minor children or adults, who are getting MMR shots, to be aware that vaccine strain measles can cause symptoms that look just like the symptoms for wild-type measles. A 2014 report published  by the National Vaccine Information Center (NVIC), The Emerging Risks of Live Virus & Virus Vectored Vaccines: Vaccine Strain Virus Infection, Shedding & Transmission, noted:

There have been published reports of vaccine strain measles with clinical symptoms that are indistinguishable from wild-type measles. There are also a few reports of measles vaccine strain virus shedding and lab confirmed infection in children following MMR vaccination. In 2002, there was a published report by researchers in France of “a child presenting with fever 8 days after vaccination with a measles-mumps-rubella vaccine. Measles virus was isolated in a throat swab taken 4 days after fever onset. This virus was then further genetically characterized as a vaccine-type virus.”6

It is disingenuous for health officials to say that the MMR vaccine cannot cause measles but, rather, only measles-like “reactions.” The vaccine has been found to cause vaccine strain measles. The question that should interest anyone concerned about measles outbreaks is, “How does a measles vaccine that contains an attenuated virus have the ability to cause a measles infection in someone?” The following observation by retired neurosurgeon Russell Blaylock, MD may offer some clues to the answer:

Now, when you make a live vaccine, what you do is you attenuate the virus so it won’t cause the measles. That’s the whole idea… that you take  this virus and you run it through tissue cultures until the virus loses its ability to produce the measles illness. And you call that an attenuated virus, and you inject it into the person… hopefully getting an immune reaction and develop resistance.

Well, the problem, and this is discussed in the virology literature, is that when this virus enters your body and it doesn’t die, because of what we call a persistent virus, and grows there for decades, because your body is producing free radicals all the time, particularly when you get ill from something else, those free radicals bombard that virus’ DNA and it can attenuate it back to a fully pathogenic virus and even produce new diseases.7