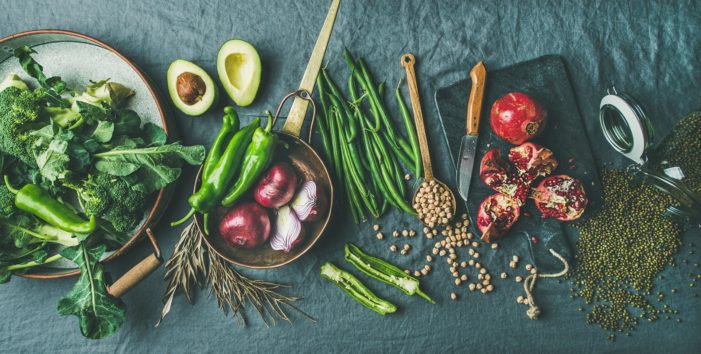 The following is the second half of a two-part article on nutrition that addresses chronic inflammation. Click here to read the first half of the article.

Most anti-inflammatory diets agree on many of the foods to include, however, the “not allowed” foods may differ, sometimes dramatically.

For example, the Autoimmune Protocol nixes nightshade vegetables, nuts, seeds and eggs. The Paleo diet is fine with grass-fed meats, eggs and seeds but rules out grains, as well as dairy and legumes such as chickpeas, lentils, beans and peanuts. The Zone allows some low-fat dairy and an occasional egg white, but discourages all refined grains. And Dr. Weil’s anti-inflammatory diet echoes the nod given to leafy greens and salmon, but encourages whole grains and adds the importance of anti-inflammatory spices like turmeric and ginger.

Following is a bare-bones summary of the basics of a few of the more popular anti-inflammatory diets, along with current medical opinions about them. Anti-inflammatory diets as a whole differ significantly from the current recommended “choose my plate” recommendations of the United States Department of Agriculture.2

The Anti-inflammatory Diet3 4
Based on both the Dietary Approaches to Stop Hypertension (DASH) and the Mediterranean diets, Dr. Weil’s anti-inflammatory diet suggestions offer a few revisions and additions, including the addition of green tea, omega-3 fatty acids and natural anti-inflammatory spices, such as turmeric and ginger.

Dr. Weil emphasizes that his approach to eating is aimed at supporting a healthy life and reducing chronic inflammation in the body, which he agrees is at the base of many chronic diseases today. He recommends that approximately 40 to 50 percent of daily calories should come from carbohydrates, 30 per cent from fat, and 20 to 30 per cent from protein.

If the Mediterranean Diet could be considered the mother of the anti-inflammatory diet movement, then Atkins may be the father of it. Quoting from the Atkins website, “The ‘Atkins Diet’ started as a fad, but quickly became a counter-conventional movement that reset people’s understanding of nutrition and weight loss, and its link to health.”

Developed in the 1960s by cardiologist Robert Atkins, MD, the new low-carb approach to eating was embraced by a population sick of fat-shunning, calorie-counting diets that left them hungry and did nothing to curb the growing epidemic of obesity in the U.S. Although his early followers may have delighted in the diet’s permission to fill up on bacon, butter and heavy cream, the diet has evolved and been modified since then.

The Atkins diet is divided into four phases, beginning with near-total abstinence from carbohydrates and gradually incorporating healthy and nutrient-rich carbs from vegetables, nuts, seeds and, eventually, starchy vegetables, fruits and grains as tolerated.

Research does support health benefits for the Atkins and other so-called ketogenic diets, which restrict carbohydrates in an effort to encourage the body to shift from using glucose as the main fuel source of energy and instead burn fat stores and produce ketones for energy.7

Some ketogenic diets have been used to successfully reduce the numbers of seizures suffered by children who have seizure disorders.

In addition, there is evidence that high-fat, low-carb eating can modify symptoms of other neuro-immune disorders, such as Parkinson’s, Alzheimer’s, multiple sclerosis, sleep disorders, and autism, as well as some types of cancer and diabetes. In his new book Fat for Fuel, Dr. Mercola highlights the importance of diet in helping the body to use fat instead of glucose for fuel in the prevention and healing from cancer and other diseases marked by inflammation in the body.8

Similar to the Paleo diet but more restrictive, the Autoimmune Protocol (AIP) diet is aimed specifically at healing leaky gut in order to treat inflammatory bowel syndrome and other autoimmune or immune-mediated diseases. Leaky gut occurs when the gastrointestinal wall becomes increasingly permeable and absorbs toxins, bacteria, fungi, and parasites, which leads to gastrointestinal dysfunction and can lead to allergy and autoimmunity.11

What’s left are primarily animal proteins, vegetables other than the nightshades, and limited fruit. Admitting it can be a difficult diet for many to follow long term, Dr. Sara Gottfried says, “The AIP is very difficult for many people to follow, but sometimes it’s temporarily necessary to fully heal a very leaky gut.”

The GAPS (Gut and Psychology Syndrome) Nutritional Program was created by Dr. Natasha Campbell-McBride as a refinement of Dr. Sidney Valentine Haas’s Specific Carbohydrate Diet (SCD), originally designed “to naturally treat chronic inflammatory conditions in the digestive tract as a result of a damaged gut lining.” The GAPS diet is individually tailored for each patient and focuses on “healing and sealing” the gut lining, and optimizing the gastrointestinal ecosystem to better support the immune system and bran function. Although few studies have shown a consistent benefit from diets like GAPS in healing disorders with an inflammatory component, the principals have shown promise in some children.

The mainstays of the GAPS diet are introduced in a specific order in the six-stage initiation stage and continued in the full GAPS protocol.  The detailed list of allowed foods—and the even more exhaustive list of prohibited foods—focuses heavily on bone broth, animal fats and fermented foods, with an emphasis on using the healthiest choices available and avoiding additives. The GAPS diet is extremely restrictive, especially at first, but personal testimonials abound from parents suggesting it may be beneficial for some children with autism spectrum disorder.

Probably the mother of all the well-publicized anti-inflammatory diets, the Mediterranean diet, is based on the common eating habits of people living in Spain, Italy, France, Greece and the Middle East. The diet was introduced to the U.S. in the early 1990s and featured a reprisal of the standardized food pyramid.

The foundation of the Mediterranean pyramid includes fruits and vegetables, whole grains, seeds and nuts, beans and legumes and olive oil to replace animal fats. An important difference is that meat is grouped at the top with sweets in the “rarely or never” category, instead of being grouped with fish and poultry.

Long-standing research supports the principals of eating the Mediterranean way, showing a clear benefit in terms of reducing risk for cardiovascular disease as well as cancer, Parkinson’s, and Alzheimer’s. Although it may not be as interesting as some of the newer diets, proponents point out that it represents a traditional healthy way of eating for life, rather than a short term diet to be kept until a specific goal has been reached.

Designed on the concept that modern humans could be healthier if we ate like our “pre-agricultural, hunter-gatherer ancestors” did, the Paleo diet focuses on “whole, unprocessed foods that resemble what they look like in nature.” The diet is based on seasonal and regional availability, with an emphasis on pasture-raised and grass-fed animal proteins and fats.

Taking the idea of eating like our ancestors did to its extreme, the Raw Food Movement holds that, “our biological and physiological requirements were in place long before the practice of cooking food began [and so]…the closer we can get to those ideals in our modern lives, the higher the level of health we will enjoy.”

Emphasizing the cumulative damage caused by the chemical changes that occur when food is cooked, “raw foodists” subsist on a diet that looks much like that of a wild primate: The emphasis is on consumption of fruit (75 to 80 percent of the daily intake), and all types of fruit are encouraged, as well as green, leafy vegetables (10 to 20 per cent) and small amounts of nuts and seeds (5 percent). Unlike other diets that eschew the nightshade vegetables, tomatoes and peppers are considered “optimal foods” in a raw food diet.

Other followers of a raw food diet add unpasteurized dairy foods, raw eggs, meat, and fish, as long as the temperature of the foods never exceeds 118 degrees. Followers claim a raw food diet can help cure inflammatory conditions such as headaches, allergies, arthritis and diabetes and can improve memory and support the immune system. Medical authorities tend to agree that the focus on high-fiber, low-salt, low-fat foods may provide a benefit in terms of risk for stroke, osteoporosis, stomach cancer, kidney disease and diabetes, primarily because it promotes weight loss. There is also considerable debate over the need to compensate for the diet’s limited supply of nutrients such as protein, vitamin B12, iron and calcium.

Based on the assumption that eating specific food groups such as sugars, grains, dairy and legumes creates an environment conducive to the development of such conditions as skin issues, digestive troubles, allergies, and chronic pain, the Whole30 diet proposes to reset the body in 30 days. The diet does not involve measuring or counting calories but encourages eating moderate portions of whole, unprocessed foods: meat, seafood, eggs, vegetables, some fruit and natural fats. It is basically an elimination plan and totally prohibits all sugars, alcohol, grains, legumes, dairy, baked goods and processed foods. For 30 days. After the initial period, food groups are added back in gradually, one at a time, with the expectation that newly acquired awareness of how foods can affect one’s health will allow for healthier choices moving forward.

Some nutritionists have misgivings about the Whole30 plan, questioning its lack of independent scientific study and alleging that it is based instead on general anecdotal anti-inflammatory theories. The diet also has been criticized for allowing high levels of sodium and processed meats like cured pork (read, bacon) while prohibiting nutrient-rich foods like legumes and dairy. The biggest criticism seems to be that a temporary plan tends to lead to temporary results.

Developed over 30 years ago by Dr. Barry Sears, the Zone diet was designed not as a weight-loss tool but as a “a life-long dietary program based on strong science to reduce diet-induced inflammation.” The basic tenets of the Zone diet can be put simply: Every meal and every snack follows the ratio of one third protein (egg whites, fish, poultry, lean beef or low-fat dairy); two thirds carbohydrates (in the form of non-starchy vegetables and a little low-sugar fruit), with a little monounsaturated fat such as olive oil, avocado, or almonds).

The Zone food pyramid looks a little different from the Mediterranean diet, with vegetables in the primary foundation tier and grains relegated to the top of the pyramid, to be consumed only rarely. The Zone also recommends the addition of supplements including Omega-3 fatty acids (fish oil) and polyphenols.

Again linking back to the idea of returning to evolutionary roots in terms of dietary habits, the Zone was designed specifically to reduce diet-induced inflammation by avoiding inflammation-producing processed carbohydrates and keeping specific physiologic markers in balance. Some medical doctors have questioned the Zone’s restrictions on certain fruits and vegetables and the difficulty of adapting the Zone diet for vegetarians.

Note: NVIC would like to hear from readers who may have had experiences—good or bad—with these or other diets that address chronic inflammation in the body.

12 Responses to "Overview of Anti-Inflammatory Diets"