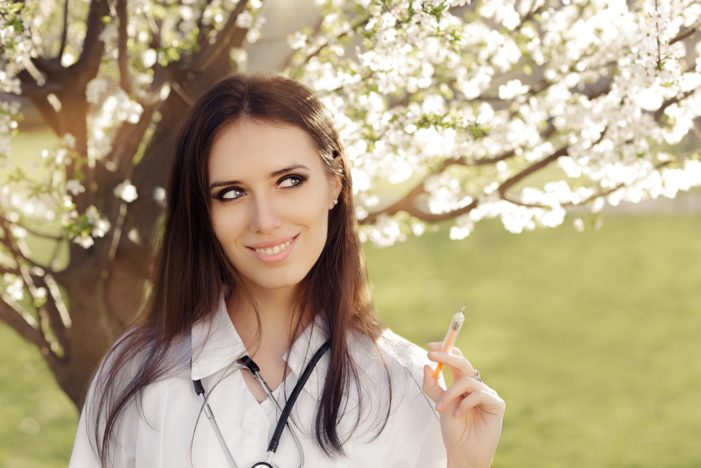 I ran across a statement the other day which grabbed my attention. So much so that I felt I had to do some research on it. The statement, published on the website of the American Academy of Allergy, Asthma & Immunology (AAAAI), reads: “Allergy shots work like a vaccine.”1

Your body responds to injected amounts of a particular allergen, given in gradually increasing doses, by developing immunity or tolerance to the allergen.1

The overall principle for vaccines is similar, only that vaccination generally focuses on stimulating a mild immune response to a certain infection-causing antigen such as a bacteria or virus.5

As with vaccinations, there are side-effects associated with allergy shots. There are mild side-effects such swelling or redness at the injection site, itching, watery eyes, stuffy nose, and sneezing. And there are more severe ones such as rapid or irregular heartbeat, tightness in the chest or throat, difficulty breathing or wheezing, dizziness or light-headedness, loss of consciousness, and death.6

So, what could be causing these reactions to allergy shots? As with vaccines, it’s hard to tell. But, as with vaccines, a good place to start would be to look at the ingredients in allergy shots starting with the allergen(s). Some of the more common allergens include “mold and pollen from grasses, ragweed and trees.”7

Allergy shots contain concentrations of either glycerol or phenol diluents8  (substances used to thin or dilute9), which double as antimicrobial agents or preservatives.10

Phenol or carbolic acid is derived from distillation of coal tar and is an extremely poisonous compound that is used in a highly diluted form as an anti-microbial in vaccines and other products.11 It is an ingredient in five vaccines licensed in the United States, including Hib (PedvaxHIB), Hib/Hep B (Comvax), Pneumococcal (PPSV-23—Pneumovax), Smallpox (Vaccinia—ACAM2000), and Typhoid (inactivated—Typhim Vi).

Although the safety record of injected phenol is unclear, phenol has been known to have a “toxic chemical effect on the central nervous system leading to sudden collapse and loss of consciousness.”12

Allergy shots also contain the blood plasma protein known as human serum albumin (HSA),10 13 which is used as a stabilizer. HSA has been known to cause anaphylaxis,14 described by the AAAAI as a”serious, life-threatening allergic reaction.”15

Anaphylaxis requires immediate medical treatment, including a prompt injection of epinephrine and a trip to a hospital emergency room. If it isn’t treated properly, anaphylaxis can be fatal.14

Ah, but here’s the real kicker. Allergy shots can contain aluminum as an adjuvant. Same as with vaccines, only perhaps much more aluminum per shot and cumulatively, given that allergy shots are given more frequently (often weekly or monthly7 16) than vaccines.17

According to Christopher Exley, PhD, professor of bioinorganic chemistry at Keele University in the United Kingdom:

“There are very few data purporting to the safety of aluminium adjuvants in allergy immunotherapy and particularly so in relation to longer term health effects,” adds Dr. Exley.18

More than 50 million people in the U.S. suffer from allergies every year. Allergies are the sixth leading cause of chronic illness among Americans and cost the U.S. economy more than $18 billion annually. What we don’t know is how many people are suffering from the side-effects of the allergy shots they take and what the economic costs are of that treatment.19

There is a general belief that allergy shots are “almost always are safe if given correctly.”16 So, as with vaccines, there does not appear to be an urgency within the medical community to ascertain whether that belief is valid. This is unfortunate because the incidence of allergies in the U.S. is continuing to rise each year 20 and, likely, so will the practice of giving allergy shots.

64 Responses to "Allergy Shots are Vaccines?"