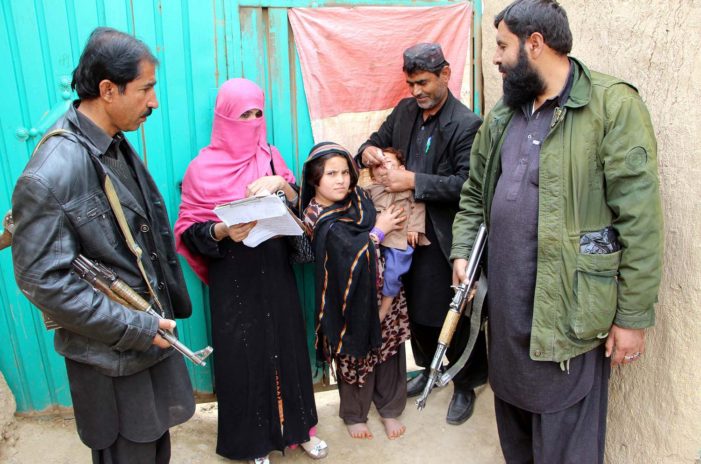 Two children in the Tehsil Bara area of the Khyber Agency tribal region in Pakistan reportedly died last week “moments” after receiving the live oral poliovirus vaccine (OPV).1 2 Another 11 children, who had been administered the vaccine in Tehsil Bara, fell unconscious and were taken to Hayatabad hospital in the city of Peshawar. Four of the 11 children remain in critical condition.2 3

Although the two dead children, identified as Abu Bakar and Musa, died after getting the live oral polio vaccine that has not been given to children in the U.S since the late 1990s. A local surgeon, Dr. Niaz Afridi, said the precise cause of death had yet to be determined and that samples of the vaccine had been sent to the capital city of Islamabad for examination.1

The Pakistani government is in the middle of a major anti-polio vaccination campaign to eradicate polio from Pakistan by 2017. The program calls for a “multi-pronged strategy with a well-developed work plan to ensure all children are vaccinated and any circulating virus is detected quickly and responded to immediately.”4

According to local health officials, Pakistan, along with Afghanistan and Nigeria, remain the world’s only countries in which wild type polio remains endemic.5 Countries in Africa and Asia have been conducting frequent “pulse” polio vaccine campaigns among children for several decades in an effort to eradicate wild type polioviruses, even as vaccine strain poliovirus now contaminates water supplies in many countries.

In October 2015, a polio vaccination campaign was suspended in the city of Bahawalpur in Pakistan’s state of Punjab after seven children, ranging between two months to 18 months of age, became sick within hours after getting the OPV. Two of the children, two-year-old Sakina and Muhammad Qasim, died and five children became critically ill and were treated at Bahawalpur’s Bahawal Victoria Hospital.6

“They told us that the vaccine would protect our children from polio, but instead, it killed them,” said Muhammad Akhtar, a resident of a Jhindani, a community near Bahawalpur.6

OPV has long been known to actually cause vaccine strain polio paralysis in some individuals who get the vaccine, as well as cause paralysis in some who come in close contact with recently vaccinated persons shedding vaccine strain polio virus in saliva, urine and other body secretions.7 According to the U.S. Centers for Disease Control and Prevention (CDC), “Cases of vaccine-associated paralytic poliomyelitis cases do occur in countries using oral poliovirus vaccine.”8

“India is the perfect example of a country where scientists have long questioned the association between OPV campaigns and increases in unexplained cases of sudden paralysis among children,” noted Patrice La Vigne in a recent article in The Vaccine Reaction.8