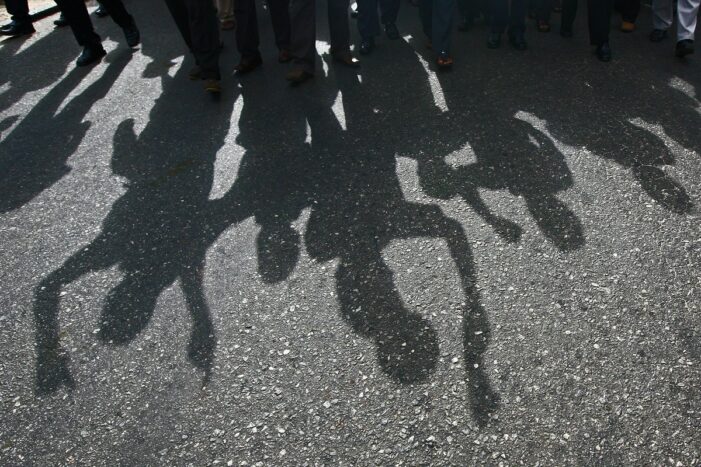 While public health officials at the World Health Organization (WHO) and in other countries argue about whether the new SARS CoV-2 virus is causing a “second wave” of infections in countries that are easing lockdown measures or the world is simply experiencing “one big wave of transmission,” since late July Germany and other European countries have been reporting increases in COVID-19 cases and deaths.1 2 As governments discuss whether to re-institute regulations enforcing lockdowns, the people of Germany made their voices heard on Aug. 1, 2020 in Berlin in the biggest anti-coronavirus lockdown, anti-masking protest yet held anywhere in the world.

Declared by event organizers as “Day of Freedom—The End of the Pandemic,” mainstream media outlets like the Associated Press and Reuters estimated that the peaceful demonstration drew a crowd of 20,000 people. However, first-hand social media reports estimated hundreds of thousands of people—perhaps over one million—marched from the Brandenburg Gate, which is near the Reichstag building housing the German parliament, and then rallied on a boulevard in the city’s large Tiergarten park.

According to one Reuters report:

Protesters danced and sang, “We are free people!” to the tune of rock band Queen’s ‘We Will Rock You.’ Others marched with placards saying, ‘We are making noise because you are stealing our freedom!’ and ‘Do think! Don’t wear a mask!’

“Our demand is to return to democracy,” said one protester who declined to give his name. “The mask that enslaves us must go.’”3

‘We Are the Second Wave”

According to Associated Press, protesters came from across Germany and held signs that said: “We are being forced to wear a muzzle,” “Natural defense instead of vaccination” and “We are the second wave.”

AP reported that when police using bullhorns warned those marching in the streets to wear masks and adhere to social distancing rules and were ignored, a criminal complaint against the rally’s organizer was drawn up for “failing to enforce hygiene rules” and protesters moved to the Tiergarten park to continue the rally before being dispersed without incident.4

The Irish Times noted that, “Germany’s management of the pandemic has widely been viewed as relatively successful, with a lower death rate than comparable countries. The country has been easing lockdown measures since late April but social-distancing rules remain in place, as does a requirement to wear masks in public transport and shops.”5 The U.K. newspaper compared Germany’s death toll—“just over 9,150 people out of more than 210,670 confirmed virus cases”—as being “five times less than Britain’s, which has a smaller population.”

Although the large numbers of people who traveled to Berlin to march against the government’s lockdown and masking requirements came from big cities and small towns all over Germany, most big media companies described them as “conspiracy theorists” and “right wing populists.”6

A co-leader of the Social Democrats, the junior party in Germany’s governing coalition, was quoted by the Associated Press angrily criticizing the protestors, alleging “They are not just endangering our health, they are endangering our success against the pandemic and for the revival of the economy, education and society. Irresponsible!”7

Reuter’s quoted a protestor, who countered that:

Only a few scientists around the world who follow the government’s lead are heard. Those who hold different views are silenced, censored or discredited as defenders of conspiracy theories.8

Unlike the U.S. and most European countries, which instituted strict universal social lockdown measures, Sweden’s public health agency refused to order a country-wide lockdown this year.9 Instead, public health officials allowed a controlled natural spread of the new coronavirus so the population could develop “herd immunity.” Voluntary social distancing measures were instituted to allow the country to continue to operate economically and socially without closing offices, restaurants, primary schools, recreational facilities and other parts of society.

At the end of July, European countries that had implemented strict lockdowns during 2020 started reporting a “second wave” of SARS CoV-2 infections accompanied by mortality increases, including Belgium, Netherlands, France, Germany, Spain and the U.K. However, new infections in Sweden have been steadily declining. Newsweek reported that:10

Amid fears over a potential second wave of novel coronavirus across Europe, new infections in Sweden, where full lockdown measures were not implemented, have mostly declined since late June.

Even though Sweden currently ranks eighth among countries with the highest number of COVID-19 deaths per 100,000 people—higher than the U.S. and Brazil, which are number one and two in terms of numbers of COVID-19 deaths per 100,000 people—Sweden’s chief epidemiologist Dr. Anders Tegnell said, “We are now seeing rapidly falling cases, we have continuously had healthcare that has been working, there have been free beds at any given time, never any crowding in the hospitals.”

Tegnell told Newsweek that failure to manage deaths among the elderly living in long term care facilities at the beginning of the outbreak contributed to Sweden’s high death toll, and changes have been made to control outbreaks in those facilities.