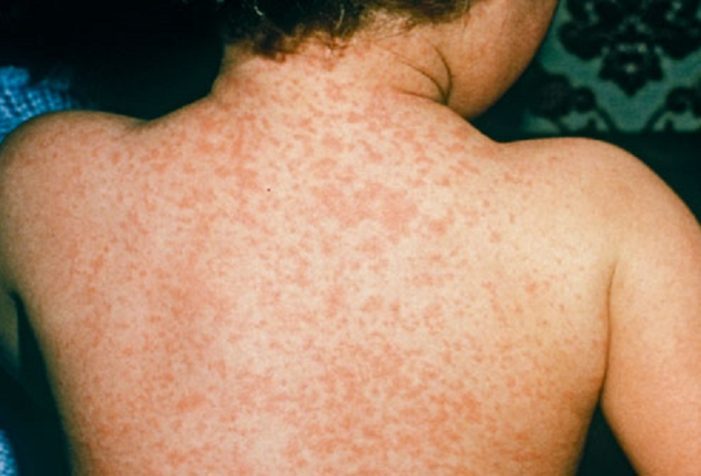 Media sources in Michigan reported in April 2019 that two children in the state who were believed to have measles turned out not to have disease, after all. Genotype lab testing of the measles virus identified in the children’s blood  was conducted and it was found to match the attenuated (weakened) vaccine strain measles virus in the MMR (measles, mumps, rubella). The children did not get infected with wild-type measles.1

Based on that conclusion, health officials described the measles-like symptoms (fever, skin rash, dry cough, runny nose, sore throat, inflamed eyes and white spots with bluish-white centers on a red background inside the mouth on the inner lining of the cheek) as a vaccine reaction. Both children had recently been given the MMR vaccine and were mistakenly clinically diagnosed with wild-type measles when, in fact, they were experiencing signs of vaccine strain measles from recently receiving the live attenuated measles vaccine (MMR or MMR-V). Unlike wild-type measles infections, which can be transmitted from person to person, public health officials maintain that vaccine strain measles only affects the recently vaccinated person and cannot be spread from person to person.1 2

The product manufacturer insert for Merck & Co.’s ProQuad (MMR-V) vaccine, which combines measles, mumps, rubella and varicella zoster vaccines into one shot, acknowledges that the vaccine can cause measles symptoms.1 2

On May 23, 2019, New Hampshire Department of Health and Human Services (DHHS) corrected itself and said that a child who had been diagnosed with measles the previous week also did not have measles but rather a reaction to the vaccine that resembled a measles virus infection. Vaccine strain measles infection is not a “reaction” in the classic sense, as live attenuated vaccines like MMR contain weakened viruses that infect and replicate in the body to stimulate artificial immunity without causing the wild type viral disease.5

Additional lab work indicated the child’s symptoms were likely due to a vaccine reaction from the measles, mumps, rubella vaccine—also known as MMR. The child had been vaccinated several days before starting to show symptoms.6

New Hampshire’s state epidemiologist Benjamin Chan, MD, MPH said that the child had an unusually strong reaction to the measles or MMR vaccine. “Over the last five years, probably close to 50,000 doses of the MMR vaccine have been administered to children around the state and we’ve never had reports of this type of reaction before,” Dr. Chan said.7

“More serious or extensive reactions that resemble a real (i.e. wild-type) measles virus infection, as was seen in this child, are very rare,” DHHS said in a statement. According to DHHS, “The scientific literature has found no confirmed cases of human-to-human transmission of the vaccine strain of the measles virus.”8

That does not mean it cannot happen.

There is no active surveillance and testing for evidence of vaccine strain live virus shedding, transmission and infection among populations routinely being given multiple doses of live virus vaccines, including measles vaccine. Therefore, it is unknown exactly how many vaccinated children and adults in the U.S. or other countries are shedding and transmitting vaccine strain live viruses.9

Vaccine strain measles can cause rash and other symptoms of its wild-type cousin, but, since it is believed to lack the capacity to spread from human to human, it is not considered a public health threat. Still, ironically, it is a potential side effect of the live attenuated MMR and MMR-V vaccines.