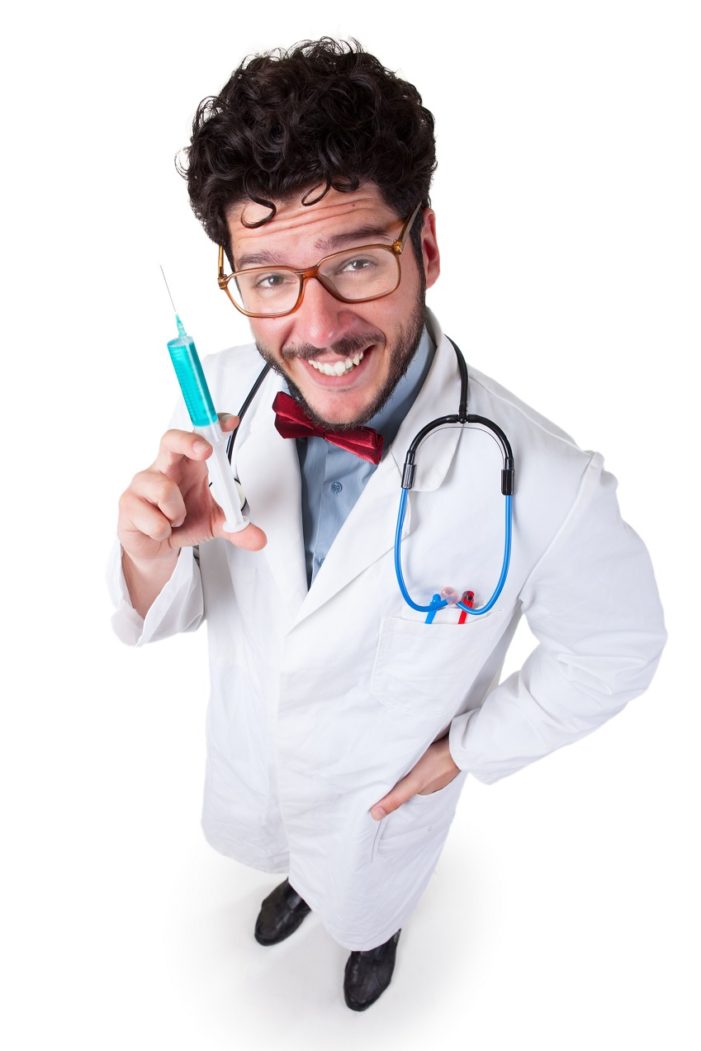 One of the most surreal moments in television history took place at the 76th Golden Globe Awards ceremony at The Beverly Hilton hotel in Beverly Hills, California on Jan. 6, 2019. In what appeared to be a pre-planned stunt, show co-hosts Sandra Oh and Andy Samberg announced that the audience in attendance would be treated to free flu shots.1 2

Prior to a commercial break, Samberg announced, “Normally at this point of the show, the host would do something fun and spontaneous to show how we’re all just ordinary people, like ordering pizza for everyone.” Oh followed up, “But since we already get food at the Globes, we thought we’d mix it up and try something new. So, roll up your sleeves Hollywood, ‘cause you’re all getting flu shots!”1 2

With electronic dance music duo LMFAO’s song “Shots” blasting in the background and almost all of the audience laughing, with notable exceptions, a team of five people wearing white lab coats and holding vaccine syringes marched across the stage and stormed the floor to offer flu shots to the seated celebrities—many of whom seemed unsure whether to laugh, cringe or run from the unfolding spectacle.1 2

While Oh and Samberg remained onstage dancing and singing “shots, shots, shots, shots, shots, shots… shots!” you could hear Samberg egging on one of the inoculators, “Excuse me mam, you’re definitely going to want to get [Willem] Dafoe.” It sounded like they were playing a game of disco tag or something and Dafoe looked confused, not amused.1 2

Meanwhile, Oh sought to assure members of the audience that they were in safe hands, letting them know that, “These nurses are all licensed professionals straight from the Rite Aid in Echo Park.”1 2

“And look, if you’re an anti-vaxxer,” joked Samberg, “just put a napkin over your head and we’ll skip you.”1 2

During the 2014 Oscars, host Ellen DeGeneres brought in a pizza delivery man to pass out pizza to members of the audience. At the 2016 Emmys, host Jimmy Kimmel handed out peanut butter and jelly sandwiches. At the 2017 Oscars, Kimmel arranged to have his audience showered with candy, cookies and donuts parachuted from the ceiling.3 4 5

All of those “feed-the-audience” gimmicks were obviously aimed at generating publicity and drawing a few extra laughs. It seems like Oh and Samberg may simply have wanted to take the element of surprise entertainment to another level. But who knows who those individuals in the lab coats were and what was in those syringes. If they were, indeed, licensed medical professionals and they were carrying actual flu shots, it is worth noting that the three Fluzone influenza vaccines licensed in the United States contain egg protein that could cause allergic reactions in some people—or worse, flu shots can cause Guillain-Barré Syndrome (GBS).6

The whole thing was sold as a bit of harmless, innocent fun aimed at promoting a public health message. That’s not the way it came off and people posted scathing remarks on Twitter and other social media platforms about how bizarre it was. It was all in very poor taste. It was also just plain weird.