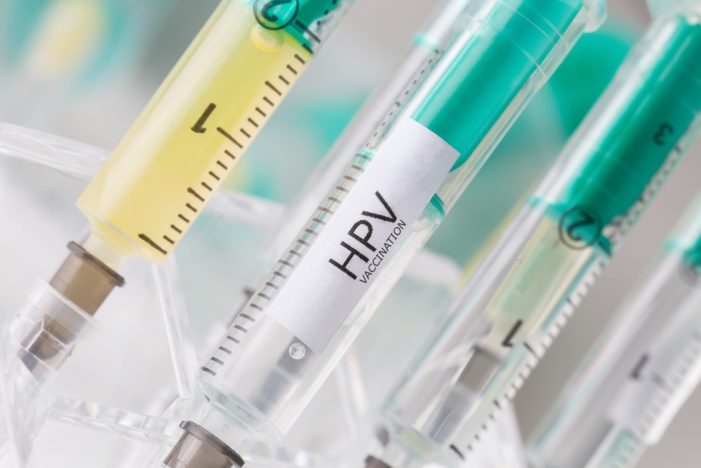 The American Cancer Society (ACS) has set an aggressive goal to achieve an 80 percent uptake rate among American children with two doses human papillomavirus (HPV) vaccine by 2026. To gain that coverage, 14 million more preteen children would need to complete the two-dose series, for a total of 57.62 million doses above and beyond the number of vaccinations given to date.1 HPV vaccine is one of the most expensive vaccines on the CDC recommended childhood vaccine schedule, costing a pricey $168 to $204 per dose, with Merck being the sole producer of HPV vaccine (Gardasil) in the U.S.2

The rationale ACS has given for setting the 80 percent HPV vaccine coverage goal is based on the number of reported cancers and cancer deaths associated with chronic HPV infection in the United States.

According to the CDC, invasive cancers are not generally tested for the presence of HPV in most cancer registries, so data are estimated based on the finding of HPV DNA in special studies used a reference for reference for making estimates.4

Until the last few years, cervical cancer was the predominant type associated with chronic HPV infection, but between 1999 and 2015 oropharyngeal cancer began increasing rapidly and has now overtaken cervical cancer as the most common cancer linked to HPV.4Rates of cervical and vaginal carcinoma have continued a downward trend seen since pap screening became a routine part of women’s health care beginning in the late 1950s.1

These six potentially HPV-related cancers add up to approximately 18,000 deaths annually, accounting for less than three per cent of the 595,000 reported annual U.S. cancer deaths.4 Of note is the fact that, in 2005, a year before the first four-strain HPV vaccine, Gardasil, was licensed and recommended for all 12-13  year old girls, the American Cancer Society estimated that there were 10,370 cervical cancer cases with 3,710 deaths.6 Compared to the  estimated 13,240 cervical cancer cases and 4,170 deaths in 2018, this represents an increase in cervical cancer cases in the U.S. after a decade of HPV vaccine use among adolescents. The CDC reported that by 2017,  71 percent of adolescent girls had received more than one dose of HPV vaccine and there was a 68 percent coverage rate among all adolescents.7

Almost everyone who has been sexually active will contract an asymptomatic HPV infection at some point, but in almost all cases, the body clears the virus on its own within two years without complications. Even when vaginal or cervical HPV infection does not resolve spontaneously and becomes chronic, it  often “takes decades to progress to invasive cervical cancer.”4

Since its introduction in June 2006, Merck & Co.’s HPV vaccine Gardasil has been embroiled in controversy. Originally, concerns were raised that perceived protection against a sexually transmitted virus might encourage young girls to engage in sexual activity, although no evidence has emerged to show that is the case.6

There also have been concerns that the pre- and post-licensure safety studies of the fast-tracked Gardasil vaccine were both overstated and misleading, with reported results selectively chosen to increase the appearance of positive results.8 The Food and Drug Administration (FDA) allowed Merck to use an aluminum containing placebo as a control in safety studies, even though Gardasil contains an aluminum adjuvant, effectively increasing the appearance of safety.9

Immediately after Gardasil vaccine was licensed in 2006, Gardasil’s potential for causing serious side effects began to be has been widely reported.10 The serious complications of HPV vaccination continue to be reported today in countries around the world.11

Too Soon to Claim Cancer Prevention

Contrary to the popular assertion that HPV vaccination “prevents cervical cancer,”16 the vaccine is too new for any real data on the effect it might have on incidence of cancer. All that can realistically be measured is the reported incidence of HPV infections associated with the nine HPV strains included in a newer version of Merck’s Gardasil vaccine that was licensed in 2015.17

Research has shown that women vaccinated with Gardasil have a higher incidence of HPV infection with HPV strains that are not covered by the vaccine.14

One meta-analysis indicated a slight increase in two “nonvaccine high-risk HPV types (HPV39 and HPV52) and in two possible high-risk types (HPV53 and HPV73).”18 Those researchers said that, although the results merit further study, they were not conclusive at this point.

With current technology and routine medical check-ups and screening, chronic HPV infection is often detectable and manageable. The available evidence does not support an aggressive plan to spend more than $11 billion to pursue an 80 percent vaccination rate among children with an under-studied and highly reactive vaccine to theoretically prevent less than three percent of all cancers in the US.

51 Responses to "Mass HPV Vaccination Plan for the U.S."