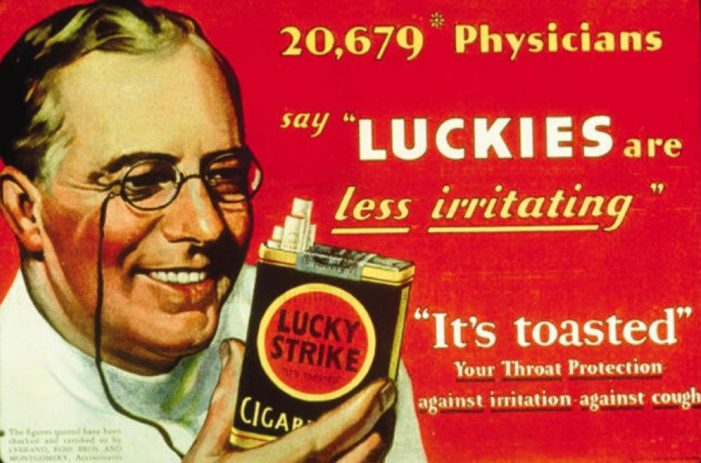 From the 1930s to 1950s, smoking cigarettes was the norm and the epitome of “cool,” and the habit was fashionable for both men and women.1 2 Hollywood movies depicted smoking as intelligent, sophisticated and healthy. The medical community was not immune from the trend: in the early 1950s, more than 50 percent of physicians smoked cigarettes.3

It was during this same period that public anxiety about the health risks of smoking began to emerge.1 In order to counteract public concerns about the safety of smoking cigarettes, the tobacco industry devised many strategies to gain public trust, one of which was to use physicians at the center of their advertising campaigns.1

Once Upon a Time, Cigarettes Were Endorsed by Physicians

There was a time in history, prior to the invention of the Internet, when physicians were the ultimate authority on health.4 In the last couple of decades, easy access to information has changed the physician-patient relationship from patients wholeheartedly trusting their doctor’s education, expertise and advice to patients asking questions and wanting to take an active role in making decisions about their health.4

When the public began to become suspicious of the health risks associated with smoking in the 1940s, tobacco companies capitalized on the public’s trust in physicians to reassure consumers that their product was safe.1 4 According to Robert Jackler, MD, professor and chair of otolaryngology at Stanford University Medical Center:

The public was becoming increasingly worried about the health consequences of cigarettes. They started to refer to cigarettes as coffin nails and started talking about smoker’s cough and smoker’s hack. The companies saw a threat to their success and business model. Tobacco companies asked themselves: How can we go about reassuring the public that particularly cigarettes, but also cigars and pipes, are not harmful?4

It was at that point that images of physicians began to be used in cigarette advertisements.1

Famous Cigarette Campaign in U.S. Used the Physician Image as the Central Theme

In the 1940s, RJ Reynolds Tobacco Company launched one of the most famous U.S. advertising campaigns of this era for its Camel brand cigarettes. Known as the “More Doctors” campaign,1 the company’s national advertising campaign was centered on the slogan, “More Doctors Smoke Camels than Any Other Cigarette.”1 The advertisements featured actors’ acting/posing as doctors while lighting up cigarettes with the famous slogan.5

RJ Reynolds claimed that surveys conducted by an “independent” company found that Camel was the leading brand smoked by 113,597 doctors from every branch of medicine.1 According to an article reviewing the role of physicians in cigarette advertising in the U.S., which was published in the American Journal of Public Health in 2006:

This “independent” surveying was conducted by RJ Reynolds’s advertising agency, the William Esty Company, whose employees questioned physicians about their smoking habits at medical conferences and in their offices. It appears that most doctors were surveyed about their cigarette brand of choice just after being provided complimentary cartons of Camels.1

As Dr. Jackler pointed out:

The idea was that if you show a physician being an enthusiastic partaker in smoking, the public gets the notion, ‘With what doctors know, if they choose to smoke this brand it must be a safer, better brand,’ or the public thought that smoking itself must be OK.4

Martha Gardner, PhD, and Allan Brandt, PhD who authored the report in the American Journal of Public Health stated:

These advertisements also suggested that the individual physicians’ clinical judgment should continue to be the arbiter of the harms of cigarette smoking even as systematic health evidence accumulated.1

In hindsight, the manner in which tobacco companies aligned their product with medical professionals highlights the cultural authority that physicians and medicine hold in our society.1

These marketing tactics sound all too familiar. We are witnessing similar patterns with the pharmaceutical industry’s marketing of their products, particularly vaccines. As more people question the safety and effectiveness of vaccines and the ethics of vaccine mandates, vaccine manufacturers have cast physicians, particularly pediatricians, as the experts on vaccines. However, this may not be true, as Marco Cáceres explained in an article in The Vaccine Reaction titled “Doctors Are No Experts on Vaccines.”6

Vaccine makers may simply be using physicians to promote sales and widespread use of their products. The logic behind the strategy is the same as that employed by the tobacco industry—using physician authority to gain public trust in vaccines. According to Cáceres:

We are conditioned to accept as fact that our family doctors, our pediatricians and obstetricians, and the other specialists we occasionally consult or seek medical care from always know what they’re talking about when it comes to the safety and effectiveness of vaccines. We are taught not to contradict, or even question, doctors about vaccines because it is they, not us, who know best.6

Pharmaceutical companies are also known to “bribe” physicians with lavish gifts such as luxury trips, promotional products, bonuses, etc., in hopes of increasing their product sales. In fact, a 2016 study published in JAMA Internal Medicine revealed that physicians who accepted free lunches from drug companies were more likely to promote the companies’ products to their patients.7 Big Pharma is essentially capitalizing on the public’s trust in physicians.

What is different now is that the physician-patient relationship has evolved over the last few decades.8 Patients are increasingly turning to the Internet to conduct their own research into medical and health related information as scientific journal publications have become more easily accessible than in the past. Patients are becoming more proactive and informed on matters related to their own health and are demanding more power in the medical decision making process rather than simply following the doctor’s orders.8 A higher education level and advances in technology have allowed for this cultural shift to occur in the U.S. and other developed countries.

As people have more access to medical and scientific knowledge, traditional paternalism in medicine is changing.8 Given this changing dynamic between physicians and patients, how long can pharmaceutical companies continue to successfully use physicians to convince the public that every vaccine Pharma sells is safe?