Tracking the Mutations of the SARS-CoV-2 Virus 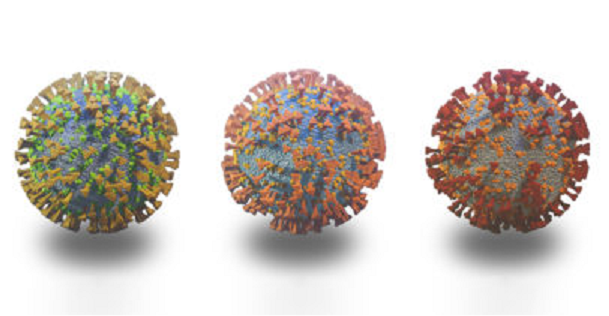 As is the nature of viruses, the SARS-CoV-2 virus that causes COVID-19 disease symptoms continues to mutate. Some scientists estimate it evolves at a rate of two new mutations every month, although most changes are minor and considered clinically unimportant.1 2 Depending on the type of genetic changes that occur, mutations can affect disease symptoms, such as severity or ease of transmission.3

So far, existing vaccines for COVID-19 reportedly provide at least partial protection against hospitalization and death from the SARS-CoV-2 variants that have developed so far,4 but vaccine manufacturers are already experimenting with tailoring boosters to address future variants.5 The World Health Organization (WHO) has expressed confidence that if future variants are able to evade existing vaccines, “it will be possible to change the composition of the vaccines to protect against these variants.”6

With so many SARS-CoV-2 variants first recognized in one or two geographical areas and then spreading around the world, scientists and public health officials determined that a system for naming them all was necessary. Referring to the variants in terms of the regions in which they are first detected (the Indian variant, the U.K. variant) has been called “stigmatizing and discriminatory” by the WHO, whose lead COVID-19 epidemiologist said, “No country should be stigmatized for detecting and reporting variants.”7

Also, the location where a given variant is first identified is not necessarily its place of origin.  Discovery probably more accurately reflects the sophistication of monitoring capabilities in the region rather than the emergence of a new mutation.8

WHO officials have expressed similar concerns during previous epidemics, when former WHO representative Keiji Fukuda said:

We’ve seen certain disease names provoke a backlash against members of particular religious or ethnic communities, create unjustified barriers to travel, commerce and trade, and trigger needless slaughtering of food animals. This can have serious consequences for peoples’ lives and livelihoods.9

Such designations also can be totally misleading, as in the case of the so-called 1918-1919 Spanish flu, which was so devastating to populations in the U.S. and globally. Although its actual origins have never been definitively established, it has been proposed by some historians to have originated in Kansas, in the U.S., rather than anywhere near Spain.10 11

While the formal scientific nomenclature established for SARS-CoV-2 variants provides useful information for scientific research, those scientific names can be cumbersome to use, difficult to remember and prone to misreporting. In response to the challenge, the WHO convened a group of worldwide experts in existing naming systems, along with other researchers and international partners, to consider various designation strategies to simplify references to the SARS-CoV-2 mutations.

After considering various other naming systems, including Greek gods and goddesses, plants, fruits, lost religions and totally made up “pseudo-classical names,12 the group ultimately agreed to recommend the use of letters of the Greek alphabet to differentiate among the many new strains.13

The first four SARS-CoV-2 variants to fall under the new guidelines are those originally referred to as the U.K./Kent (B.1.1.7), South Africa (B.1.351), Brazil (P.1) and India (B.1.617.2) variants, hereafter referred to as the Alpha, Beta, Gamma, and Delta variants, respectively, following in order of detection.14 Two variants first identified in the U.S. (B.1.427/429 and B.1.526) were quickly dubbed Epsilon and Iota, respectively. New variants are expected to adhere to the same system of using the Greek alphabet.15

Clarifying the proposal for the WHO, Maria Van Kerkhove said, “We’re not saying replace B.1.1.7, but really just to try to help some of the dialogue with the average person… So that in public discourse, we could discuss some of these variants in more easy-to-use language.”16

A “Variant of Interest” (VOI) is defined as one with “genetic changes that are predicted or known to affect virus characteristics such as transmissibility, disease severity, immune escape, diagnostic or therapeutic escape” and that has been determined to be responsible for community transmission in more than one country and with a greater prevalence among emerging cases over time, suggesting an evolving risk in terms of public health.

A “Variant of Concern” (VOC) includes the definition of a VOI and adds one or more changes considered to be significant at a global public health level. Such changes may include an increase in transmissibility or epidemiology; increased virulence or disease presentation; or a decrease in the effectiveness of available treatments, preventive measures, vaccinations or treatments.

Currently, the only VOC identified by the WHO and U.S. Centers for Disease Control and Prevention (CDC) is Delta and its AY lineages. Of 56 known descendants of the currently prevalent Delta variant (the AY lineages), only the Delta variant AY.4.2 has been identified as a potentially independent variant. Currently active primarily in the U.K., the pathogen has been identified in six percent of sequenced tests in that country.19 The variant also has been reported to be 10 percent more transmissible than Delta, which, for reference, is as much as 60 percent more infectious than Alpha.

A “Variant of High Consequence” (VOHC) is one that clearly demonstrates a reduced response to preventive measures or countermeasures compared with previously circulating strains. There are currently no VOHCs identified in the U.S.20

“Variants Under Monitoring” (VUMs) refers to those with genetic changes that may potentially pose a future risk, but whose epidemiological impact has not been established. This is a flexible category as several variants previously defined as VOIs have been reclassified as VUMS.

Given that the new naming system was only implemented at the end of May 2021, and half of the Greek letters have already been assigned to existing variants, the longer-range plans for designating future viral mutations has been questioned. 23

Will a completely different source of names be proposed for future SARS-CoV-2 variants, in the tradition of college fraternities and sororities, will the Greek letters be combined to differentiate between variants? In the future, perhaps people will discuss their experiences with the COVID-19 infection—or its vaccination options—by asking, “I had the Phi Delta Gamma variant, what about you?”