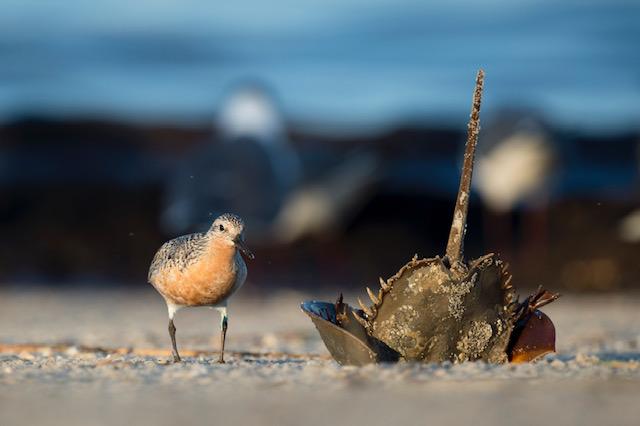 Every spring, 500,000 Atlantic Horseshoe Crabs are collected by four biopharmaceutical companies as they crawl to the mid-Atlantic beaches to lay their eggs.  The helmet-shaped arthropods are placed upside down on a rack, and a sterile needle is inserted near the heart to collect about 30 percent of their blood.1 2  The crabs are returned to the ocean and their blood, often referred to as “blue gold” due to it’s color and worth of $60,000 per gallon in a global industry valued at $50 million per year, is used to purify vaccines, injectable drugs and other sterile pharmaceuticals.3 4

Commonly referred to as a “living fossil,” horseshoe crabs have an open circulatory system with no adaptive immune response.  Instead, they have survived unchanged for an estimated 200 million years through an innate immunity based on granular amebocytes in their blood.5 These amebocytes contain the proteins of its blood clotting system, which are released when they come in contact with unwanted organisms like Gram negative bacteria.6 Endotoxin is a lipopolysaccharide found on the outer membrane of Gram-negative bacteria (such as E. coli, Salmonella, Shigella, Neisseria, Haemophilus influenza, and Bordatella pertussis)7, and when it contaminates vaccines and other injectable pharmaceutical products it can cause fever, shock, organ failure and death.8 The coagulation proteins extracted from horseshoe crab blood, called lysates, produce an instantaneous, visible reaction to endotoxins, which has driven commercial demand from pharmaceutical and biomedical companies to confirm drug and medical device safety.9

Even an iota of endotoxin can prove to be fatal.10 John Dubczak, General Manager at Charles River Laboratories, which manufactures and globally distributes lysate products, reports, “Detection is down to one part per trillion, but we can take it down to a tenth of a trillion, and further orders of magnitude more sensitive.”11

From the 1940s to the 1970s, rabbits were used to screen pharmaceutical products for endotoxins.  In 1956 medical researchers Fred Bang and Jack Levin observed that horseshoe crab blood clotted and formed a solid mass in the presence of endotoxin, leading to the development of an endotoxin assay known as the Limulus amebocyte lysate (LAL) assay, which was approved for use by the FDA in 1977.12 13 In Asia, there is a similar test called TAL (Tachypleus amebocyte lysate) which takes its name from an Asian species of crab, Tachypleus tridentatus.

In response to concerns about dwindling populations of horseshoe crabs, the time required to catch and harvest blood from crabs, and variability that occurs with pooled batches of harvested animals, new endotoxin tests using synthetically produced recombinant Factor C (rFC) were developed to relieve pressures of a growing demand for the LAL assay.14 Although this synthetic rFC alternative was approved for use in Europe in 2016, the American Pharmacopeia, which sets the scientific standards for drugs and other products in the U.S., on June 1, 2020 declined to place rFC on equal footing with crab lysate, claiming that its safety is still unproven.15

Horseshoe Crabs can take ten to twelve years to reach maturity, and only three out of 100,000 survive their first year of life.  Once they reach adulthood, the crabs have few non-human predators and are expected to live ten or more additional years.  It is only once they reach maturity that they begin their spring migration from the shelter of deeper waters to their spawning beaches.  In the U.S., mortality of horseshoe crabs due to LAL production is estimated to be relatively low—8 to 15 percent.  However, in Asia, mortality is 100 percent because after bleeding, the crabs are sold to secondary markets for food and chitin production.16

As a result of overharvesting for use as food, bait and biomedical testing, and because of habitat loss, the American horseshoe crab is listed as Vulnerable to extinction and the Asian tri-spine horseshoe crab is classified as Endangered on the International Union for the Conservation of Nature (IUCN) Red List of Threatened Species.  The two additional Asian horseshoe crab species will soon be listed on the IUCN Red List.17

In 1990 biologists estimated 1.24 million American horseshoe crabs spawned in Delaware Bay, a main egg-laying spot and prime collection point for companies.  By 2002 that number had dropped to 333,500, and have remained at that level.18  Throughout the 1980s and 1990s biomedical harvesting seemed sustainable, and the pharmaceutical industry claimed that only three percent of the crabs they bled died.  However, by the 2000s, annual horseshoe crab counts during spawning season revealed smaller numbers and a 2010 study found that as many as 30 percent of the bled crabs ultimately died—ten times as many as first estimated.19

The depletion of horseshoe crabs can become a weak link in the food chain that reverberates with potentially disastrous consequences for species that rely on horseshoe crab eggs as vital food sources, such as diamondback terrapins, striped bass and flounder, and many migratory birds.

Demand for lysate assays to test biomedical devices and vaccines is likely to rise significantly in the next two decades due to population growth and aging, and medical advancements to improve or prolong life.  Any product or device that comes in contact with blood, lymph, spinal fluids or mucus membranes that do not pass through the body by an oral pathway must be tested for the presence of endotoxins.

“All pharmaceutical companies around the world rely on these crabs.  When you think about it, your mind is boggled by the reliance that we have on this primitive creature,” says Barbara Brummer, state director for The Nature Conservancy in New Jersey.21