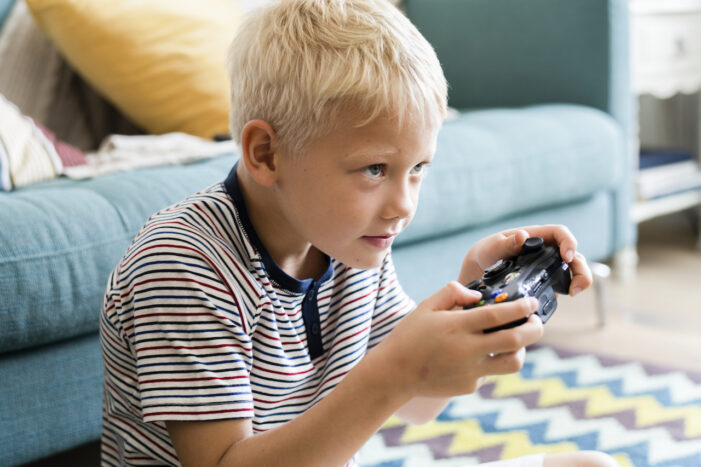 A small survey undertaken in China indicated that children with attention deficit hyperactivity disorder (ADHD) may experience particular challenges with pandemic-inspired lockdowns and school closings, but many seemed to do better with increased time in online study.1

The ability of children with ADHD—who typically have difficulty maintaining attention and concentration2—to focus on interactive electronic or on-line stimulation is a common observation. Answering the frequently asked question, “Why can my inattentive child pay attention to video games?” for Psychology Today, Dr. Victoria Dunckley explained that the rapid movement, intense colors, quick scene changes, and psychologically exciting content of video games provide enough stimulation to induce a dopamine surge, a “brain chemical involved in focus and reward pathways,” essentially allowing for “self-medication” by the child.3

Dr. Dunkley warned, however, that while video games may improve visual attention, they tend to worsen the ability to sustain focus and complete goal-oriented tasks, especially if the child may perceive tasks as boring or difficult.

Research since that 2014 article has been directed toward finding ways to use the ability of kids to stay tuned in to video input in a way that helps bolster their capacity for learning and staying focused on more mundane tasks. Numerous devices and games are now available to do just that.

According to Rohn Kessler, a Florida doctor who works with children with ADHD:

The games have the potential to increase attention stamina. They aren’t a quick fix or a one-step solution, but I have seen distracted kids increase their ability to focus.4

Some psychologists point to the potential value of neurofeedback in treating ADHD symptoms and suggest that video games may have a similar effect.5 Others believe electronic stimulation may increase the risk for and symptoms of ADHD.6

On June 15, 2020, the U.S. Food and Drug Administration (FDA) approved the first prescription video game therapy, described as a “game based digital therapeutic device,” for the treatment of children with ADHD.7 Dubbed “EndeavorRXTM (previously AKL-T01),” the gaming program has been tested in more than 600 children and has reportedly generated a statistically significant one point improvement in scores on a Test of Variables of Attention (TOVA).8

EndeavorRX was designed specifically to treat children with primary attentive or combination ADHD, not for those with primary hyperactivity-type ADHD.9

With EndeavorRx, we’re using technology to help treat a condition in an entirely new way as we directly target neurological function through medicine that feels like entertainment. Families are looking for new ways to help their children with ADHD. With today’s decision by FDA, we’re excited to offer families a first-of-its-kind non-drug treatment option and take an important first step toward our goal to help all people living with cognitive issues.10

According to Akilli, its EndeavorRx is based on a proprietary Selective Stimulus Management engine (SSMETM), which was designed to activate specific neural systems in the brain involved in attention function, along with adaptive algorithms that allow for personalization of the treatment experience. It was adapted from an earlier program called “Neuroracer,” designed by Akilli Interactive co-founder Adam Gazzaley, MD, PhD, to improve attention in older adults.11

EndeavorRX Studies on Children with ADHD

One of the most influential studies, the “Software Treatment for Actively Reducing Severity of ADHD (STARS-ADHD),” which was reviewed in The Lancet Digital Health, was a randomized, double-blind, parallel-group, controlled study of children between ages 8 and12 with confirmed ADHD. The children enrolled in the study were not taking ADHD medications (medications had to be stopped a minimum of three days before baseline) and they had to have TOVA Attention Performance Index (API) scores of −1.8 or below (TOVA is an FDA-approved, computerized, continuous performance test designed to measure attention and inhibitory control, normalized by age and gender).

Twenty research institutions in the U.S. took part in the STARS-ADHD study.12

Between July 15, 2016, and Nov 30, 2017, 857 children with ADHD were evaluated for the study. Ultimately, 348 were randomly assigned to treatment with either AKL-T01 (now called EndeavorRX) (N=180) or to the digital control group (N=168). The study required that participants use either EndeavorRX or the control program for four weeks, five days per week, with five daily sessions totaling approximately 25 minutes/day. The program was carried out at home.

Results showed that the treatment group achieved a 1.4 points or better improvement in TOVA API scores compared to controls (79, or 47 percent, versus 51, or 32 per cent). The researchers reported that more children in the EndeavorRX group moved into normal ranges in at least one objective measure of attention: 36 percent versus 21per cent, respectively. The improvements in attention as reported by the children themselves were not significantly different between the two groups, but improvements in attention were reported by parents: 97 (56 percent) of 173 in the treatment group reported seeing significant improvements compared to 71 (44 percent) of 162 in the control group.

Some Side Effects Reported in STARS-ADHD Study

Although 9.3 percent of participants experienced minor side effects including frustration, headache, dizziness, emotional reaction, nausea or aggression, no serious adverse reactions were reported in any prerelease trial.

The review by The Lancet Digital Health concluded that EndeavorRX might provide a useful addition to treatment options for ADHD, and, since the therapy is digital and can be done at home, populations without access to other forms of non-pharmacological interventions might find it particularly useful. The Lancet reviewers noted that results do not yet indicate that the treatment should be offered as an alternative to existing therapies. Akili stated that EndeavorRX “should be considered for use as part of a therapeutic program that may include: clinician-directed therapy, medication, and/or educational programs, which further address symptoms of the disorder.”13

Dr. David Rettew is skeptical about the program and its supporting studies, saying that certain flaws in the study design could affect interpretation of results. He pointed out that there were no significant improvements in global assessments of ADHD, which suggested “a limitation that has plagued other supposedly therapeutic games designed to boost cognition, which is that it can be hard to demonstrate that people get better at much more than the game itself.” He further noted that the study did not enroll any subjects with ADHD who “didn’t do sufficiently poorly on a computerized attention measure before being given a computerized treatment.”14

There are others who maintain that the FDA’s approval is premature. Dr. Joseph F. Hagan, Jr. of the American Academy of Pediatrics said more and larger studies are needed to justify recommending video games as a therapy for ADHD, as there is “still uncertainty about the long term effects of video game usage on children with ADHD.”15

Most experts agree that targeted video games and other digital programs should not be considered a stand-alone treatment for ADHD. “Medication and behavior therapy are still the gold standards for improving symptoms of the condition.”16

EndeavorRX is currently a prescription-only service that includes the program itself, a mobile tracking app and personal support services for caregivers. The base program is currently available without a prescription during the COVID-19 pandemic, but Akila states that it is, “committed to a seamless transition for them to the prescription program as appropriate.”17