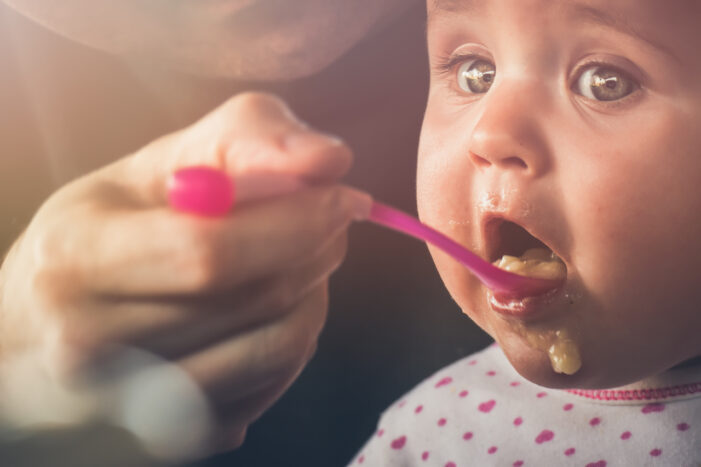 The study highlights that some baby foods were found to be particularly risky. These foods included those made with rice (cereals) were found to have the most heavy metal contamination especially inorganic arsenic. According to the report, four of seven rice cereals tested contain inorganic arsenic in excess of the U.S. Food and Drug Administration’s (FDA) proposed limit of 100 parts per billion (ppb).1

Jane Houlihan MSCE, director of science and health at HBBF and coauthor of the report states that, “For a number of these metals, there’s no known safe level. Any amount that accumulates over time in a baby’s diet can be a concern.”2

The Impact of Heavy Metals on Child Development

Every one of the heavy metals found in baby food are identified as developmental neurotoxins. They have the ability to adversely affect a child’s developing brain and nervous system, both in utero and after birth, and can lead to permanent loss of intellectual capacity and behavioral problems like attention-deficit hyperactivity disorder (ADHD).1

ll four metals found in baby food are linked to IQ loss from exposures early in life. The scientific evidence to support this stems from years of research. The HBBF study references at least 23 studies published in the past seven years, which provide evidence for how these four heavy metals can impact a child’s development.1

Chemical Compound in Baby Food Can Cause IQ Loss

The HBBF study also revealed the presence of another neurotoxin in baby food. Although not a heavy metal, the chemical compound perchlorate can affect thyroid function and brain development.2 The study lab tested 25 baby foods at a separate laboratory for perchlorate and detected it in 19 of 25 foods that were tested. All 19 foods with detectable perchlorate also contained various amounts of arsenic, lead, cadmium or mercury, and 12 contained all four heavy metals.2

Perchlorate is known to disrupt thyroid function, which is key to brain development. Exposure to perchlorate has been linked to IQ loss among children born to mothers with thyroid dysfunction who are more vulnerable to perchlorate toxicity.1

Perchiorate has been used as a rocket fuel component since the Cold War. In 2005, FDA approved the use of perchiorate as an antistatic in plastic food packaging and, in 2016, expanded the approval to cover dry food handling equipment. Perchlorate is also a degradation product of hypochlorite, which is used to disinfect food-processing equipment.1

According to Consumer Reports and HBBF, the FDA has previously proposed heavy metal safety guidelines for manufacturers of baby cereals and fruit juices. However, the FDA has not yet finalized them despite saying that the guidelines would be published by the end of 2018.2

HBBF acknowledges that arsenic levels in baby rice cereal and juice have declined 36 percent and 75 percent respectively during the past 10 years as a result of the FDA’s guidance. However, Consumer Reports senior scientist Michael Hanson, PhD says the government needs to be more proactive and accountable. He states:

This study reinforces the urgent need for the FDA to set a goal of no detectable levels of these heavy metals in baby and children’s food, and to set incremental targets for industry to meet along the way.2

More immediately, the FDA should finalize its proposed limit of 100 ppb for inorganic arsenic in infant rice cereal and should lower the limit for lead in juice from 50 ppb to 5 ppb.2

Anne Hulick, a registered nurse and director of Connecticut Clean Water Action said the federal government has not done enough to ensure that heavy metals are completely removed and undetectable in baby food.3 She stated:

Our FDA has failed to set more health protective standards, and this is frightening for parents and for health professionals. It should not be incumbent on parents to be worrying about this [with] all of the things they have to worry about.3

A few days after the HBBF report was released, Senator Chuck Schumer (D) called for the FDA to investigate the report and take more action to regulate the baby food industry.4 He said:

The report is very, very troubling. Now, we all know how bad lead can hurt a toddler, but when it’s a little baby it’s even worse.5

When these toxic metals get into a baby’s nervous system, it can retard brain development, nerve development, the very kind of things we’ve seen [with] lead.5

The FDA responded to the probe in a statement saying the agency will further investigate this matter.5

Not only do baby foods contain heavy metals, but some childhood and adult vaccines recommended by the U.S Centers for Disease Control and Prevention (CDC) contain the heavy metal mercury. In addition, there are 24 vaccines that list aluminum, which is not a heavy metal but is a metal that has no established biological function for humans,6 as a vaccine ingredient.7

Although there is emerging evidence that ingestion of metals into the body can have negative effects on health, the CDC and FDA maintain that licensed and recommended vaccines containing mercury and aluminum do not cause neurodevelopmental delays. See the CDC’s list of vaccine excipients for FDA licensed vaccines, including vaccines that contain mercury and aluminum, here.