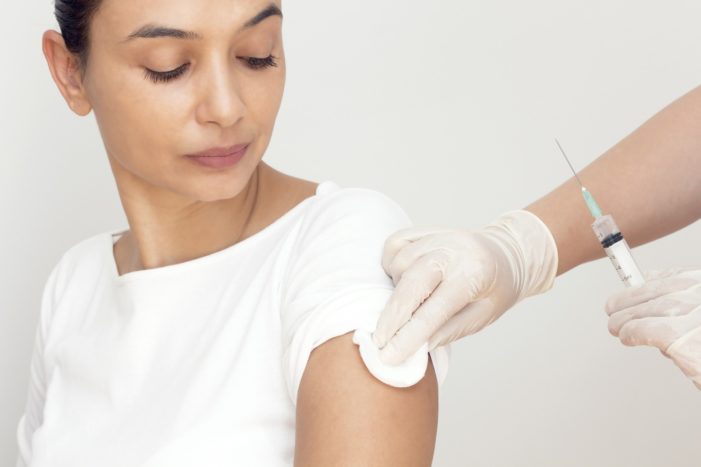 On Feb. 1, 2019, the Department for Public Health (DPH) in Kentucky announced it was investigating ” multiple infections associated with vaccinations” administered by a company called Location Vaccination of  Mt. Sterling, Kentucky. The vaccinations were given at various business locations in Kentucky, Ohio and Indiana since Sept. 1, 2018.1

According a press release issued by the Commonwealth of Kentucky Cabinet for Health and Family Services, “Individuals with vaccination-associated infections related to this provider have experienced redness, pain or tenderness, swelling, and the development of hard lumps, or nodules, at the injection site.”1 It warns, “Symptoms may start from a few days to more than 12 weeks after vaccination. Medical care is advised since infections will likely not get better on their own.”1

Severe local vaccine reactions, which produce varying degrees of redness, swelling, or pain at the injection site, are frequently reported and acknowledged reactions to vaccination.2 The CDC estimates that local reactions to childhood vaccines occur at the following rates and usually last from one to seven days:

The World Health Organization (WHO) states that, “Local and systemic reactions such as pain or fever can occur as part of the immune response. In addition, other vaccine components (e.g. adjuvants, stabilizers, and preservatives) can trigger reactions.”3 Aluminum adjuvants in vaccines have been associated with severe local reactions, including large lumps at the site of the injection.

In 2014, vaccine researchers observed that not enough is known about the biological mechanisms and systemic toxic effects of local reactions:

Adjuvants are necessary components to warrant the efficacy of vaccines, however the overstimulation of the immune system is also associated with adverse effects. Local reactions are the most frequent manifestation of toxicity induced by adjuvanted vaccines and, with the exception of the acute phase response (APR), much less is known about the systemic reactions that follow vaccination.4

There have been reports in the medical literature of abscesses forming at the site of vaccine injections, both sterile abscesses5 and abscesses that involve a bacterial infection because a microbe (such as streptococcus or staphylococcus bacteria) contaminates the vaccine. Multi-dose vaccine vials can become contaminated from use of unsterile needles or pathogenic bacteria can enter the skin at the injection site if the person administering the vaccine does not follow skin disinfection protocols. Bacterial cellulitis (local sepsis) at vaccine injection sites has been reported and usually requires antibiotics.6

On Feb. 2, it was reported that the source of the vaccine “contamination” was traced to one Mt. Sterling doctor, who provided vaccines to businesses located in Alexandria, Butler, Georgetown, Lexington, Louisville, Paris, Maysville, Mt. Sterling and Winchester, and is no longer administering vaccines.  The final words from DPH commissioner Howard to the public was framed as both a warning and an affirmation that more vaccinations are a good idea. He said, “If you received vaccine from this provider, we strongly encourage you to consider getting another round to ensure you are fully immunized and not at risk for contracting illness.”7