Could the Flu Shot Make You Depressed? 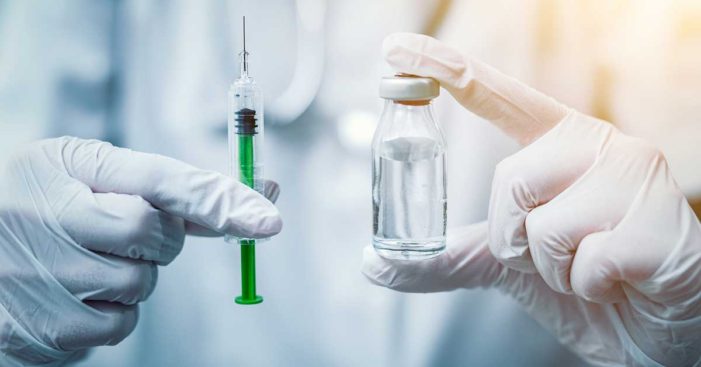 Did your doctor or friendly pharmacist tell you that the flu vaccine could put your mental health at risk?

According to the latest research, the notoriously ineffective,1 2 3 illness-inducing,4 5 potentially paralytic,6 and even lethal7 8 flu vaccine has one more side effect to add to the list: depression.

One would imagine that researchers are extensively examining drivers of depression, since it is the leading cause of disability worldwide. Aren’t scientists studying diet, toxicant exposures, acute and chronic stress, endocrine and autoimmune imbalance, medication side effects, and special synergistic combinations of these contributors to learn about their role in depression? Not exactly. The prevailing belief is that depression is a disease caused by inherited brain chemical malfunction. So why study depression disease drivers—including pharmaceutical products like vaccines—if you inherited it from your dad? If it’s in your genes, you’re bound to develop depression, right?

But the latest science is telling a very different story about our health than the model of genetic determinism. What if diseases like depression could be influenced by the choices that you make and the way you live? This is why you need to know a more complete story about health and disease, especially the heretofore ignored limitations and risks of pharmaceutical medicine.

We are more than buttons and levers: beyond the chemical imbalance model

We can all agree that reading about an entree on a menu isn’t the same as actually tasting and eating it. Or that analyzing the chemical components of a demolished building doesn’t tell us anything about what it was like to walk its halls.

Similarly, it’s important to remember that modern-day biology is a science derived from analyses of dead tissues, cells growing in artificial environments, and isolated fluids, and it is based on Newtonian linear mechanics that are now being exposed for their limitations in complex systems.

Suffice it to say that our bodies are complex systems. And that’s why new scientific models are emerging to embrace that complexity. We are all a part of the awkward but exciting transition from a linear reductionist approach to a quantum approach that invokes non-linear, unpredictable, and subjective realities to begin to comprehend the awesome nature of the human experience in this web of life.

And so it is with psychiatry and mental health. For decades, researchers have been exploring the possibility that depression is not a broken brain, but rather a wise response to perceived stress—be it physical, emotional, or psychological. And that the body expresses its efforts to adapt through a now all-too-familiar term—inflammation.

Come with me as we leave the chemical imbalance theory behind and move toward a far more elegant paradigm called psychoneuroimmunology. In fact, this paradigm is not even new, it just may be new to you because of the 17 year lag9 between science and its widespread acceptance.

Psychoneuroimmunology and the role of inflammation

Coined in 197510 and further researched by female pioneers like Dr. Candace Pert and Dr. Joan Borysenko, psychoneuroimmunology describes the connectedness among the gut, brain, hormones, and immune system—that are all linked through the stress response. This stress response is invoked whenever we are out of alignment—psychologically, physically, or emotionally.

In this model, depression is a syndrome of “evolutionary mismatch.”11 It is an expression, on the part of our immune system, of stress caused by an evolutionarily-unprecedented environment that is out of sync with our optimal health.

These stresses include lack of contact with nature and with the natural circadian rhythm of sunlight, along with consumption of a processed, nutrient-depleted diet, and exposure to industrial chemicals such as pesticides and plastics.12 Communication of the stress response is mediated through chemical messengers called cytokines. Pro-inflammatory cytokines such as IL-6 and TNF-alpha have been shown to have a linear and predictive relationship with depressive states.13 That means that the higher a person’s blood levels of IL-6 and TNF-alpha are, the higher their chance of being diagnosed with depression. In fact, the role of pro-inflammatory cytokines in driving depressive symptoms was first elucidated in hepatitis patients who were treated with interferon, a powerful pro-inflammatory cytokine; these patients then developed depression at a rate of 45%.14

The connection between inflammation and depression is so well known to researchers that scientists inject animals with pro-inflammatory substances to induce depression. For example, many animal models of depression are created by administering lipopolysaccharide (LPS) or endotoxin,15 a bacterial component that belongs in the gut, not in the bloodstream. Tellingly, in some studies, researchers inject the typhoid vaccine to induce inflammation and depressive symptoms.16

These models inadvertently demonstrate the now emerging understanding that inflammation in the body can traffic to the brain, propagating a stress response that leads to depressive symptoms. Even psychological stress can induce a body-brain response—all through the shared language of the immune system and inflammatory messengers.17 18 19

Referred to as “sickness syndrome,”7 models of inflammatory depression are characterized by symptoms that are designed to reallocate energetic resources for recovery.8 These symptoms include loss of appetite, social interest, irritability, slowed thinking, low libido, increased sleep, anhedonia, and lethargy. Depression was likely an adaptive response20 in our history of acute infectious stressors, but has been rendered chronic and disabling in a landscape of chronic, unrelenting assault on our response systems.

Now that we know that stress induces inflammation, and this inflammation can increase one’s sensitivity to further stressors and inflammation,21 we must examine pro-inflammatory medical interventions with far more scrutiny.

Designed over a century ago (prior to the discovery of the double helix geometry of DNA in 1953, reverse transcriptase, and the microbiome), vaccines are intended to induce a persistent, low-grade immune response. Vaccines are inflammatory by design. It was once thought that a vaccines could create a predictable immune response dictated by the “Th2 arm” of the so-called adaptive immune system and lead to antibody production. In theory, these vaccine-generated antibodies would stick to the invading virus or bacteria and render that “threat” harmless.

However, a more nuanced understanding of the role of the innate immune system and the adaptive immune system’s Th1 arm has rendered the antibody model incomplete.22

The inextricable links between different elements of the immune system have revealed that stimulation of one arm of the adaptive immune system, namely Th2 immunity, may result in unintended effects related to Th1 and innate immunity.

The myriad ingredients in vaccines could each independently, and perhaps synergistically, invoke what is called a cell danger response,27 or an alarm system alert that triggers inflammation and downstream autoimmunity.28

This response was demonstrated in one of the more concerning studies conducted in pregnant recipients of the flu vaccine, which found a statistically significant increase in an inflammatory marker called C-reactive protein up to three days after injection.29 Of course, this effect may have played a causal role in the 116-fold increase in fetal death during the 2009-2010 flu season.30

The FLUARIX label clearly states that this vaccine has not been demonstrated safe or effective for pregnant women or nursing mothers—so why are these women pressured to get the flu shot??

The dearth of data on the safety and efficacy of vaccines, which I summarize in a peer-reviewed, indexed article called the Psychobiology of Vaccination Effects,31 is consistent with the “get it to market and on the recommended list” approach to the commercial agenda of the pharma/vaccine industry.

Ignoring the many well-established variables impacting immunity, pharmaceutical products like vaccines rest on the illusory assumption that a veritable body-bomb of injected toxicants could possibly have only one specific desired effect on something as complex as immunity.

A few studies have queried the mental health aspects of vaccines, and the data are provocative. In one compelling study, the role of lifestyle as a specific risk factor for psychiatric vaccine injury was explored in a study of 12 year-old-girls who were vaccinated with live attenuated rubella. Vaccinated subjects from lower socioeconomic classes exhibited higher severity of depressed mood, along with social, attentional, and behavioral problems.32

Relatedly, in a randomized, placebo controlled trial of healthy men, the typhoid vaccine produced higher levels of the inflammatory cytokine IL-6 when the subjects were subjectively stressed. These stressed and inflamed subjects led to changes in hormone, neurotransmitter, and subjective mood states.33

In a placebo-controlled trial, typhoid vaccine recipients were found to have “produced a robust inflammatory response indexed by increased circulating IL-6 accompanied by a significant increase in fatigue, confusion, and impaired concentration.”34

These few studies were preliminary efforts to contribute to a more sophisticated perspective on the role of inflammation in vaccine response and adverse effects.

Because the list of studies examining the role of vaccination in depression onset is so small, this latest contribution is very meaningful. Titled Within-subject associations between inflammation and features of depression: Using the flu vaccine as a mild inflammatory stimulus,35 Kuhlman et al. dared to investigate this very topic.

In this study, 41 undergraduates received the seasonal trivalent influenza vaccine, and they kept daily diaries of mood, feelings of social disconnection, sleep quality, and physical symptoms for one week before and after the flu shot. Scientists measured blood levels of IL-6 immediately before and one day after vaccination. The results speak for themselves.

In nearly every subject (32 of 41), the flu vaccine increased blood levels of IL-6 (average shown by the red line).

The study concludes with the following statement: “Consistent with our hypotheses, larger increases in IL-6 were associated with greater depressed mood and greater confusion in the week following vaccination.”

One size fits all?

The new biology is speaking. It’s saying that we are not machines. We are not interchangeable subjects in a randomized trial, and we are not just our bodies. We are our beliefs, our stressors, our diets, our exposures, our sense of meaning and purpose. We are our microbiome, our mitochondrial functioning, and our own personal epigenetic expression. And each of us has a different story, through which our health threads a plotline.

There can no longer be a one-size fits all intervention that denies all of this reality in service of profit and dogma.

We know, for example, that women experience higher rates of adverse effects, according to preliminary research, and higher rates of depression after vaccination. What about our children, over two million of whom are now on an antidepressant despite suppressed evidence that these medications can be ineffective and lethal? What about those of us whose buckets of body-burden are already overflowing the day we succumb to media-propaganda and head to our doctor’s office for that shot? Who will connect the dots between cause and effect so that these people are not slapped with yet another diagnostic label, this time psychiatric?

Your body was not designed with a faulty, inadequate, or incomplete immune system. It was designed to sound the alarm when we have wandered off of our path.

As basic science research illuminates the complexity of human health, we are also being led gently back to basics and to the superlative power of lifestyle medicine to heal the injuries we inflict on ourselves.

“Man himself has emerged from a line descent that began with microbial life, a line common to all plant and animal species…{he} is dependent not only on other human beings and on the physical world but also on other creatures—animals, plants, microbes—that have evolved together with him. Man will ultimately destroy himself if he thoughtlessly eliminates the organisms that constitute essential links in the complex and delicate web of life of which he is a part.”  — Rene Dubos

3 Responses to "Could the Flu Shot Make You Depressed?"