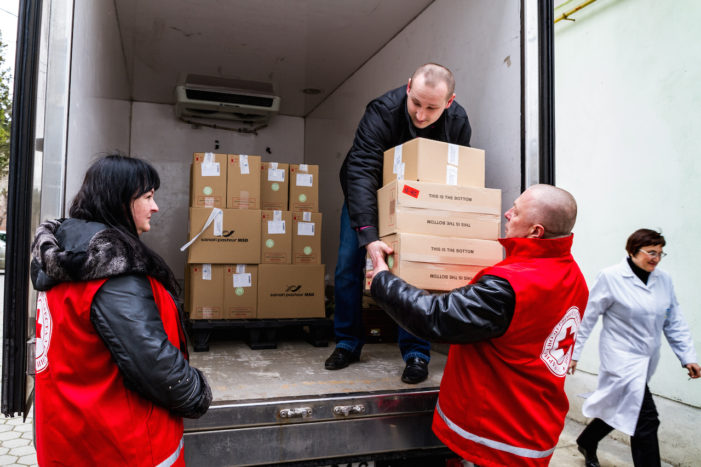 In recent years there has been a shortage of measles vaccines in Ukraine. Vaccination rates had dropped to 31% in 2016 and were the lowest in Europe and, yet, there were hardly any cases of measles. In 2017, sufficient vaccines became available for a ‘catch-up campaign’ and 90% of the children in Ukraine received the MMR. Since then, there has been an explosion of reported cases of measles. The number has already surpassed 12,000.

Why is the media ignoring the current outbreak of measles in Ukraine? And what is really going on?

The World Health Organization (WHO) keeps track of the disease and death rates of every country in the world for all infectious diseases. On Apr. 5, 2018, the WHO published the following page on its website regarding measles in  Ukraine: Ukraine restores immunization coverage in momentous effort to stop measles outbreak that has affected more than 12 000 this year1

Over 12 000 people have been infected with measles in Ukraine so far this year. Of those affected, 9158 have required hospitalization and 9 have died, according to information provided by national health authorities as of 27 April 2018. Large-scale outbreak response measures have been undertaken since the start of the outbreak in 2017 to curb further spread of the disease and restore high routine immunization coverage.

In 2008, 95% of eligible children in Ukraine received their second (and final) recommended dose of measles-mumps-rubella vaccine (MMR) on time according to the national routine schedule. By 2016, this rate had fallen to 31%, the lowest coverage in the WHO European Region and among the lowest in the world.

Since July 2017, a national Measles Task Force, including the Ministry of Health, key stakeholders and partners such as WHO and the United Nations Children’s Fund (UNICEF), has been working to vaccinate every eligible child as they reach the appropriate age for MMR vaccination according to the national routine immunization schedule.

By the end of 2017, routine vaccination coverage had drastically improved compared to previous years: 93% of 1-year-olds received the first dose of MMR on time in 2017 and 91% of 6-year-olds received their second dose as recommended. Figures for January and February 2018 indicate that the country is on track to reach at least 95% routine coverage with both doses of MMR vaccine by the end of the year.1

It could easily be concluded that the decreasing vaccination rate (from 95% in 2008 to 31% in 2016) is the cause of a gigantic measles outbreak in Ukraine. But the WHO is twisting reality in a cunning way.

The following information comes from the WHO Report Global Measles and Rubella Update 2018.

Since July 2017, the task force (WHO, UNICEF and the Ministry of Public Health) started to increase MMR vaccination coverage in Ukraine. Immediately after July 2017, the numbers of reported measles cases began to increase.

The graph below contains information on Ukraine measles cases from March 2016 to April 2018, and shows the number of measles cases per month. (Red = positively confirmed by a laboratory test; Green = clinically determined by a doctor).

It is striking that the red bars (cases lab confirmed as wild measles virus) rise less quickly than the green bars (cases clinically confirmed by doctor). Read what the CDC and the ‘Nederlands Tijdschrift der Geneeskunde’ (‘Dutch Journal of Medicine’) have to say about this later in this article.

The criteria for clinical and laboratory confirmed diagnoses of measles are defined by the Official Journal of the European Union as follows:

Clinical criteria: Any person with fever AND Maculo-papular rash AND at least one of the following three: Cough, Coryza (Cold), Conjunctivitis (red eyes).

Laboratory criteria: At least one of the following four:

Laboratory results need to be interpreted according to the vaccination status. If recently vaccinated, investigate for wild virus.3

Is it possible that the 12,000 Ukraine measles cases reported by WHO are exaggerated? The majority of the bar on the extreme right in the 2018 graph above is green and, therefore, those reported measles cases have not been confirmed by a laboratory.

And worse, is it possible that these are mainly misdiagnosed clinical cases of vaccine strain measles that occurred after receipt of MMR vaccine? This question is logical because the data shows that in 2016, fewer children were being vaccinated and there were few reported measles cases; in 2017, more children got MMR vaccinations and there were more reported measles cases; in 2018, even more children got vaccinated and even more measles cases were reported, with the majority of cases clinically confirmed by doctors rather than positively lab confirmed.

Is It Wild Type Measles or Vaccine Strain Measles?

The Dutch Journal of Medicine published in 2017 stated:

Within 14 days after MMR vaccination, a patient may develop a disease that is comparable to infection with a wild-type measles virus. The incidence of infection with wild-type measles is low, so when this happens it is more likely that it is a response to vaccination. Additional research can cause unrest among the parents and therefore reassuring words are more appropriate.4

The website of the U.S. Centers for Disease Control and Prevention (CDC) has the following information:

Measles virus genotyping can play an important role in tracking transmission pathways during outbreak investigations. Genotyping results can help confirm, disprove, or detect connections among cases…Genotyping is also the only way to distinguish whether a person has wild-type measles virus infection, or a rash caused by a recent measles vaccination. A small percentage of measles vaccine recipients experience rash and fever 10 to 14 days following vaccination. During outbreaks, measles vaccine is administered to help control the outbreak, and in these situations, vaccine reactions may be mistakenly classified as measles cases. The vaccine strain of measles virus can be distinguished from wild-type viruses by determination of the genotype from clinical samples or virus isolates.5

The WHO Manipulates the Figures and the Media

In recent times we have seen that the number of reported measles cases in Ukraine (12,000 +) should be large enough to reach the attention of the media. When there were 2,395 cases of measles reported in Italy in 2017, it was front page news. The danger of the disease was overemphasized and the reported outbreak of measles served as an argument to make it mandatory for “irresponsible parents” to vaccinate their children.6

Following is a statement from Dr. Zsusanna Jakab, WHO Regional Director of Europe taken from a press release that also appeared on the WHO website at the beginning of 2018. Dr. Jakab’s statement has been widely quoted by major newspapers in Europe:

Every new person affected by measles in Europe reminds us that unvaccinated children and adults, regardless of where they live, remain at risk of catching the disease and spreading it to others who may not be able to get vaccinated. Over 20,000 cases of measles, and 35 lives lost in 2017 alone, are a tragedy we simply cannot accept.”7

But Dr. Zsusanna Jakab, who thinks that 20,000 cases across the whole of Europe is a “tragedy we cannot accept,” remains silent about 12,000 cases reported in the Ukraine.

Do the authorities know more than they want the public to know?

What Was the Response of the Health Authorities to the Sudden Measles Outbreak in Ukraine?

The number of lab confirmed cases of measles in Ukraine is relatively small. But the health authorities maintain that, ‘Ukraine is restoring immunization coverage in a gigantic effort to stop the outbreak of measles, which affected more than 12,000 people this year.’ It does not matter whether the MMR vaccination campaign completely misses the target and probably causes more reported cases of measles than it prevents because the reported cases may really be vaccine strain measles cases, not wild-type measles cases.

Nevertheless, a new order of vaccines has been placed by the Ministry of Health in Ukraine to “combat the epidemic.”

The Ministry of Health in Ukraine reported the following:

At the request of the Ministry of Health (MOH), the United Nations Children’s Fund (UNICEF) has delivered a new batch of measles, mumps and rubella vaccines. Ministry officials report receiving 800,000 doses.8 9

For reliable protection against infectious diseases, vaccination levels should be higher than 95% (Editorial: it currently is 93%, but those 2%…)—then we can talk about collective immunity. For the first time, Ukraine is fully equipped with vaccines – reliable, safe and effective. I call parents to vaccinate children, and doctors encourage patients to vaccinate.8 9

Incomprehensible. The health authorities have apparently forgotten that in 2006, in a year that the vaccination rate was 98%, there were still 42,742 cases of measles reported.10 11

The bizarre behavior of politicians and vaccine policymakers, the manipulation of disease statistics, the ‘selective’ reporting in the media and the increasing pressure to oblige parents to vaccinate—it is not surprising that all these exaggerations and half truths have combined to cause people to lose trust in the system. The situation in the Ukraine only adds to what so many of us know already.

Note: This article was reprinted with the permission of its authors. It was originally published by Stichting Vaccinvri. Mara Gabriëlle is mother of two unvaccinated children and part of the coreteam and translation team of the Foundation Vaccine-Free, and moderator of the FB-group. Daphne Knipping is part of the coreteam of Foundation Vaccine-Free, and moderator of the FB-group. Door (Dora) Frankema is mother of two unvaccinated adult children and author of the book ‘Vaccinvrij!—ouders, artsen en wetenschappers over vaccins en vaccinvrij opgroeien’ (‘Vaccinefree!—parents, docters and scientist on vaccines an raising vaccinefree children’). She is initiator of the Foundation Vaccine-Free in the Netherlands.