Is MMR Vaccine a Fraud or Does It Just Wear Off Quickly? 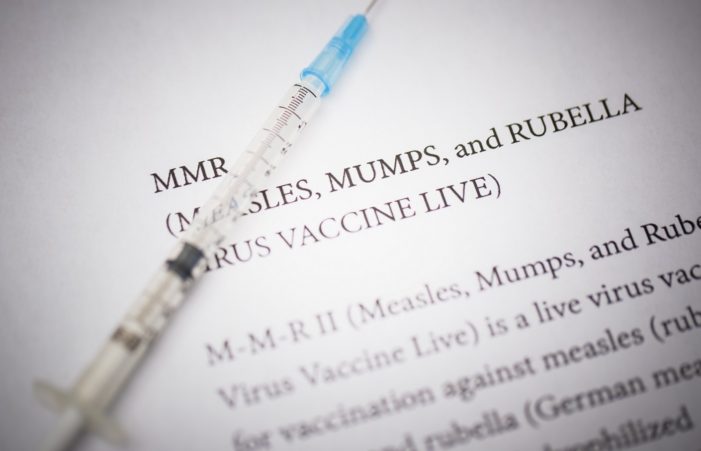 In 1986, public health officials stated that MMR vaccination rates for kindergarten children were in excess of 95 percent and that one dose of live attenuated measles, mumps and rubella vaccine (MMR) would eliminate the three common childhood diseases in the U.S.1 In 1989, parents were informed that a single dose of MMR vaccine was inadequate for providing lifelong protection against these common childhood diseases and that children would need to get a second dose of MMR.2

Today, 95 percent of children entering kindergarten3 have received two doses of MMR vaccine, as have 92 percent of school children ages 13 to 17 years.4

In some states, the MMR vaccination rate is approaching 100 percent.5 Despite achieving the sought-for MMR vaccination rate for more than three decades, which theoretically should ensure “herd immunity,” outbreaks of both measles and mumps keep occurring—and many of those who get sick are children and adults who have been vaccinated.

Mumps is Making a Comeback

As recently reported by Science Magazine6 and The New York Times,7 mumps is making a strong comeback among college students, with hundreds of outbreaks occurring on U.S. campuses over the past two decades. Last summer, the Minnesota Department of Health reported its largest mumps outbreak since 2006.8

According to recent research,9 the reason for this appears to be, at least in part, waning vaccine-acquired immunity. In other words, protection from the MMR vaccine is wearing off quicker than expected. Science Magazine writes:

[Epidemiologist Joseph Lewnard and immunologist Yonatan Grad, both at the Harvard T. H. Chan School of Public Health in Boston] compiled data from six previous studies of the vaccine’s effectiveness carried out in the United States and Europe between 1967 and 2008. (None of the studies is part of a current fraudulent claims lawsuit against U.S. vaccine maker Merck.)

Based on these data, they estimated that immunity to mumps lasts about 16 to 50 years, or about 27 years on average. That means as much as 25 percent of a vaccinated population can lose immunity within eight years, and half can lose it within 19 years … The team then built mathematical models using the same data to assess how declining immunity might affect the susceptibility of the U.S. population.

When they ran the models, their findings lined up with reality. For instance, the model predicted that 10- to 19-year-olds who had received a single dose of the mumps vaccine at 12 months were more susceptible to infection; indeed, outbreaks in those age groups happened in the late 1980s and early 1990s. In 1989, the Centers for Disease Control and Prevention added a second dose of the vaccine at age 4 to 6 years. Outbreaks then shifted to the college age group.

A Third Booster Shot May Be Added

According to public health officials, the proposed solution to boosting vaccine-acquired mumps immunity in the U.S. population is to add a third booster shot of MMR vaccine at age 18.

Unfortunately, adding a booster for mumps means giving an additional dose of measles and rubella vaccines as well, as the three are only available in the combined MMR vaccine or combined MMR-varicella (MMRV) vaccine. At present, a third MMR shot is routinely recommended during active mumps outbreaks, even though there is no solid proof that this strategy is effective.

Considering two doses of the vaccine are failing to protect young adults from mumps, adding a third dose, plus two additional doses of measles and rubella vaccines, seems like a questionable strategy, especially in light of evidence that the mumps vaccine’s effectiveness may have been exaggerated to begin with.

According to a lawsuit filed eight years ago, the manufacturer of mumps vaccine—which is also the sole provider of MMR vaccine in the U.S.—is accused of going to illegal lengths to hide the vaccine’s ineffectiveness. So, might this resurgence of mumps simply be the result of using a vaccine that doesn’t provide immunity to begin with?10 And, if so, why add more of something that doesn’t work? After all, the MMR vaccine is not without its risks, as you’ll see below.

In 2010, two Merck virologists filed a federal lawsuit against their former employer, alleging the vaccine maker lied about the effectiveness of the mumps portion of its MMR II vaccine.11 The whistleblowers, Stephen Krahling and Joan Wlochowski, claimed they witnessed “firsthand the improper testing and data falsification in which Merck engaged to artificially inflate the vaccine’s efficacy findings.”

According to Krahling and Wlochowski, a number of different fraudulent tactics were used, all with the aim to “report efficacy of 95 percent or higher regardless of the vaccine’s true efficacy.”12 For example, the MMR vaccine’s effectiveness was tested against the virus used in the vaccine rather than the natural, wild mumps virus that you’d actually be exposed to in the real world. Animal antibodies were also said to have been added to the test results to give the appearance of a robust immune response.13

For details on how they allegedly pulled this off, read Suzanne Humphries’ excellent summary,14 which explains in layman’s terms how the tests were manipulated. Merck allegedly falsified the data to hide the fact that the vaccine significantly declined in effectiveness.15 By artificially inflating the efficacy, Merck has been able to maintain its monopoly over the mumps vaccine market.

This was also the main point of contention of a second class action lawsuit, filed by Chatom Primary Care16 in 2012, which charged Merck with violating the False Claims Act. Both of these lawsuits were given the green light to proceed in 2014,17 18 and are still pending.

In 2015, Merck was accused of stonewalling, “refusing to respond to questions about the efficacy of the vaccine,” according to a court filing by Krahling and Wlochowski’s legal team.19 “Merck should not be permitted to raise as one of its principal defenses that its vaccine has a high efficacy … but then refuse to answer what it claims that efficacy actually is,” they said.

There’s No Such Thing as Vaccine-Acquired Herd Immunity

This certainly isn’t the first time vaccine effectiveness has been questioned. While herd immunity is thrown around like gospel, much of the protection vaccines offer has actually been shown to wane rather quickly. The fact is, vaccine-acquired artificial immunity does not work the same way as the naturally acquired longer-lasting immunity you get after recovering from the disease.

A majority of adults do not get booster shots, so most of the adult population is, in effect, “unvaccinated.” This calls into question the idea that a 95 percent-plus vaccination rate among children achieves vaccine-acquired “herd immunity” in a population. While there is such a thing as naturally acquired herd immunity, vaccine-induced herd immunity is a total misnomer.

Vaccine makers have simply assumed that vaccines would provide the same kind of longer-lasting natural immunity as recovery from viral and bacterial infections, but the science and history of vaccination clearly shows that this is not the case.

Vaccination and exposure to a given disease produce two qualitatively different types of immune responses. To learn more about this, please see my previous interview with Barbara Loe Fisher, cofounder and president of the National Vaccine Information Center (NVIC). As explained by Fisher:

Vaccines do not confer the same type of immunity that natural exposure to the disease does … [V]accines only confer temporary protection… In most cases natural exposure to disease would give you a longer-lasting, more robust, qualitatively superior immunity because it gives you both cell mediated immunity and humoral immunity.

MMR Does Not Work as Advertised

It’s quite clear the MMR vaccine does not work as well as advertised in preventing mumps, even after most children in the U.S. have gotten two doses of MMR for several decades. Public health officials have known about the problem with mumps vaccine ineffectiveness since at least 2006, when a nationwide outbreak of mumps occurred among older children and young adults who had received two MMR shots.20

In 2014, researchers investigated a mumps outbreak among a group of students in Orange County, New York. Of the more than 2,500 who had received two doses of MMR vaccine, 13 percent developed mumps21—more than double the number you’d expect were the vaccine to actually have a 95 percent efficacy.

Now, if two doses of the vaccine have “worn off” by the time you enter college, just how many doses will be needed to protect an individual throughout life? And, just how many doses of MMR are safe to administer in a lifetime? Clearly there is far more that needs to be understood about mumps infection and the MMR vaccine before a third dose is added to the already-packed vaccine schedule recommended by federal health officials for infants, children and adolescents through age 18.

Mumps Virus May Have Mutated to Evade the Vaccine

Poor effectiveness could also be the result of viral mutations. There are a number of different mumps virus strains included in vaccines produced by different vaccine manufacturers in different countries. The U.S. uses the Jeryl-Lynn mumps strain in the MMR vaccine developed and sold in the U.S. by Merck. There’s significant disagreement among scientists and health officials about whether the mumps virus is evolving to evade the vaccine.

Two years ago, Dr. Dirk Haselow, an epidemiologist with the Arkansas Department of Health said,22 “We are … worried that this vaccine may indeed not be protecting against the strain of mumps that is circulating as well as it could. With the number of people we’ve seen infected, we’d expect 3 of 400 cases of orchitis, or swollen testicles in boys, and we’ve seen 5.”

A 2014 paper written by U.S. researchers developing a new mumps vaccine also suggested that a possible cause of mumps outbreaks in vaccinated Americans could be due to ” … the antigenic differences between the genotype A vaccine strain and the genotype G circulating wild-type mumps viruses.”23

Be Aware of MMR Vaccine Risks

If a vaccine is indeed highly effective, and avoiding the disease in question is worth the risk of the potential side effects from the vaccine, then many people would conclude that the vaccine’s benefits outweigh the risks. They may even be in favor of an additional dose.

As of March 1, 2018, there had been 1,060 claims filed in the federal Vaccine Injury Compensation Program for injuries and deaths following MMR or MMR-Varicella (MMRV) vaccinations … Using the MedAlerts search engine, as of February 4, 2018, there had been 88,437 adverse events reported to the Vaccine Adverse Events Reporting System (VAERS) in connection with MMR or MMRV vaccines since 1990.

Keep in mind that less than 10 percent of vaccine adverse events are ever reported to VAERS.25 According to some estimates, only about 1 percent are ever reported, so all of these numbers likely vastly underestimate the true harm.

A concerning study published in Acta Neuropathologica in February 2017 also describes the first confirmed report of vaccine-strain mumps virus (live-attenuated mumps virus Jeryl Lynn, or MuVJL) found in the brain of a child who suffered “devastating neurological complications” as a result. According to the researchers:26

This is the first confirmed report of MuVJL5 associated with chronic encephalitis and highlights the need to exclude immunodeficient individuals from immunization with live-attenuated vaccines. The diagnosis was only possible by deep sequencing of the brain biopsy.

5 Responses to "Is MMR Vaccine a Fraud or Does It Just Wear Off Quickly?"