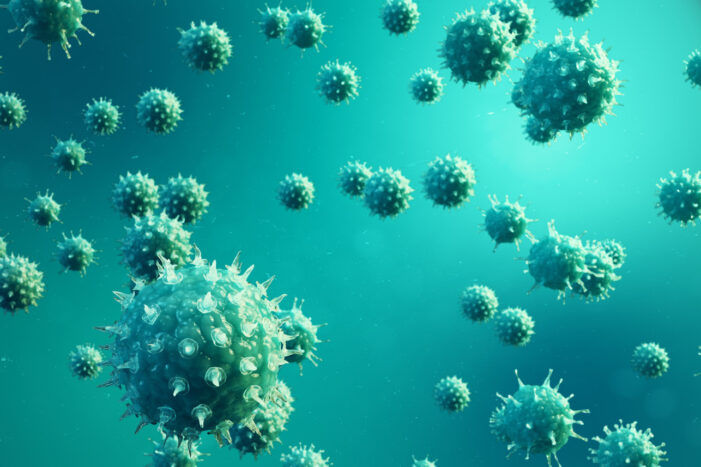 One of the best estimates we have for the average total number of cells in the human body is 37.2 trillion.1 2 3 It sounds like a lot, until you consider that the average number of microbes in an adult human is estimated at 20 times the number of cells in the body.4 That would equal approximately 744 trillion microorganisms. In other words, we humans are vastly more microbial than cellular in nature.4 Each of us is, essentially, one giant germ.

Some scientists have estimated the average number of bacteria in the human body at about 40 trillion,5 6 or roughly the same as the number of cells. They have also estimated that there are about 10 times more viruses than bacteria in the body. That would equal approximately 400 trillion viruses. The remaining microbes in the body would include fungi, protozoa, helminths ( parasitic worms), prions, and protists (amoeba, plasmodium, etc.).7 8

Bacteria and viruses are perhaps the most well-known microbes, because they are the ones that cause the most common infections, which can lead to the development of diseases.9 But it’s important to note that not all bacteria and viruses causes infections. In fact, while we have been taught to fear viruses and bacteria, the vast majority of do not cause disease but help keep us healthy.10 We know, example, that there are good bacteria and bad bacteria. We need good bacteria to help us digest food, protect against harmful bacteria and other harmful microbes, and boost the immune system.9 11 12

The same is true for viruses. There are good viruses and bad viruses. As I wrote last year in an article about how viruses are often made to be easy scapegoats for health problems we don’t fully understand, “[W]e carry lots of viruses within us all the time, and they don’t harm us in the least bit. And some of them actually do good things for us.”13

In an article in Popular Science, Jason Tetro wrote:

[T]here are many species (of viruses) inside us that are either harmless, or may even provide us some benefit. This latter group, also called symbionts, has received remarkably little attention.14

The thesis may seem somewhat controversial considering most of what we hear about viruses, at least in the public forum, is negative. There’s good reason for that. After all, in the last year alone, the United States has had to deal with cold viruses, flu, West Nile virus, Chikungunya, Heartland virus, and of course, Ebola. But while these viruses get all the headlines, many good examples tend to get no attention at all. This has caused a skewed view of these microbial creatures and quite possibly has prevented us from seeing the good they can do for our health.13

According to a study published by Marilyn J. Roossinck, PhD in the Journal of Virology, “Viruses are being redefined as more than just pathogens. They are also critical symbiotic partners in the health of their hosts.”15 Research findings by microbiologist Jeremy Barr, PhD at San Diego State University in California are consistent with Dr. Roossinck’s research on the benefits of some viruses. Experiments conducted by Dr. Barr showed how viruses found in mucus can “infect and kill bacteria.”16

So, viruses come in different forms. Interestingly, most viruses do not infect and cause disease—they are not pathogens.

[H]umans are always infected with viruses, most of which rarely, if ever, become symptomatic.17

Sometimes, even when viruses are pathogenic and appear to be bad, such as when they cause the common cold or a case of influenza, they are actually serving a useful purpose. Ben Kim, DC of Toronto, Canada explains:

By and large, the viruses that cause the common cold and the flu infect mainly your weakest cells; cells that are already burdened with excessive waste products and toxins are most likely to allow viruses to infect them. These are cells that you want to get rid of anyway, to be replaced by new, healthy cells. So in the big scheme of things, a cold or flu is a natural event that can allow your body to purge itself of old and damaged cells that, in the absence of viral infection, would normally take much longer to identify, destroy, and eliminate.18

Many viruses can be either beneficial (the symbionts) or, at least, harmless. The harmless ones are sometimes referred to as passenger viruses. Wikipedia defines a passenger virus as a “virus that is frequently found in samples from diseased tissue, such as tumours, but does not contribute to causing the disease.”19

Molecular biologist Peter H. Duesberg, PhD at the University of California in Berkeley describes passenger viruses as “fossils” of viruses that caused infections long ago and were killed of by the immune system. Old pathogenic viruses leave behind fossils, or traces, of their DNA in the cells where they replicated. These fossils, according to Dr. Duesberg play no role, either good or bad. They’re just dead.20

4 Responses to "Viruses May Be Harmful, Helpful, or Passengers"