Why Did Peanut Butter Become An Allergen? 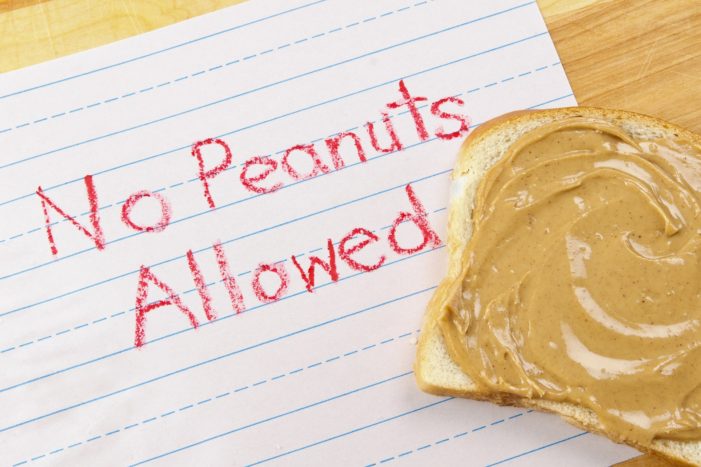 I can remember eating peanut butter and jelly sandwiches for lunch while growing up. Hell, I still eat them. Now, as I try to watch my sugar intake, I enjoy peanut butter on apple slices. It’s a healthy indulgence. But, for those with peanut allergies, it’s a life threatening allergen. I had never heard of peanut allergies until one of my coworkers told me about her son. Peanuts, and other foods such as sesame and tree nuts, can cause anaphylaxis. The lips and tongue swell, the throat gets itchy and then closes, and it’s basically 15 minutes until the sufferer goes into anaphylactic shock and sudden death. In that time, an Epi-Pen™ can be used to rescue the triggered child before the allergic reaction progresses too far. How scary is that for a parent?

Overhead view of peanut butter on bread with red crayon warning against peanuts which are a dangerous allergen for many children and adults.

What’s worse for a child with a peanut allergy is that he/she doesn’t have to consume the peanut or peanut butter to trigger the symptoms. Any contact with someone who has eaten peanut butter can set off the deadly chain reaction. This is why schools do not allow children to bring peanut butter and jelly sandwiches for lunch. Or anything that is made with peanuts for that matter. The trigger is THAT strong.

I wondered why when I was growing up I had never heard of peanut allergies. Turns out, it is a fairly recent phenomenon. Peanut allergies became prevalent in the late 1990s increasing over the next few years by 50 percent. Now, one in thirteen children has some sort of food allergy. But, peanut allergies seem to get the most attention. Maybe it’s because we think of peanut butter as a common food consumed by children. That it’s kids who are presenting with peanut allergies causes me to wonder where this allergy originated and why it’s seemingly a mini-epidemic.

I have been researching it all day and I couldn’t find the exact root cause. It seems it’s a contentious issue. There are various theories and opinions about what causes peanut allergy.

I will present some of the theories here in the hope that we become more conscious of what we are eating and why some of us find common foods life threatening. And, also so that you can become more empathic to those who suffer from severe allergies such as peanut allergy. The inconvenience of watching that your child doesn’t bring nuts to school is nothing when you remember that you are saving a child a life-threatening reaction.

Another theory is that kids have been prevented from exposure to any germs at all due to the use of hand sanitizers and the overuse of antibiotics. Peanut allergy sufferers aren’t exposed to any dirt and antibiotic use has killed off their natural defenses. That sounds a lot to me like the farm exposure theory. Or what I like to call the “Dirt is good for you” theory. Especially, exposure to dirt early on in a child’s life. For a few years, while the peanut allergy in children exploded in numbers, doctors advised mothers-to-be to avoid peanuts while pregnant and to introduce their child to peanuts later on, after three years of age. But, that didn’t work, and then the opposite advice was given to pregnant women. Eat peanuts or peanut butter while pregnant and introduce peanut butter to your child early on. Peanut allergies continued to grow in numbers and they are often accompanied by asthma, another life-threatening trigger.

There’s a theory that the peanut oil, once used as an adjuvant in vaccines, is the culprit. But, as peanut oil is no longer used as an adjuvant, it doesn’t explain the continued rise of peanut allergy. Then there is the food we eat. By the time any flesh foods hit our plates, it’s been given antibiotics and hormones while alive, and sterilized, and dyed after slaughter. That doesn’t include the other foods children consume. Most crops that are not organic are Roundup™-ready. Fertilizers, pesticides, preservatives, are the norm for most grains, fruits, and vegetables. And, I’m not even going to get into what gets INTO all the processed food that comes in a box, a bag, or in a To Go container. We really don’t know what drugs, chemicals, and toxins we are eating.

As peanuts grow in the ground, we could place the blame on contaminated soil. Peanut crops are rotated with cotton crops. That means the soil that peanuts grow in is full of glyphosates. And, fungicides. And, pesticides. The USDA found that peanuts contained eight different pesticides when studied. Non organic peanut butter is also made using sugar and hydrogenated oils. Remember the latter from last week’s blog? Hydrogenated oils are the unhealthy fats that are causing America’s diabesity. So, for those of you who not allergic, pick up the organic peanut butter.

Of course, drug companies are looking to find a treatment for peanut allergy. The money will not flow if we eradicate the cause of the epidemic. So, the price of the Epi-pen™ and inhalers will continue to skyrocket. All because our environment is full of toxins.

I wanted to write about peanut allergies and the mystery as to the exact cause because I know children who suffer from this and other allergies. Suffer, in that they could have a fatal reaction to a close encounter with a peanut. But, also suffer because they are among the few in their class who cannot tolerate any exposure and therefore no child can enjoy peanuts and or peanut butter at school. So, there’s that “otherness.” Some parents are resentful of these allergic kids, like they and their anxious parents don’t have enough to worry about. Seems sad, but there it is.

I also want readers to start paying attention to what is in our food. Our soil. Our water. Our air. At some point, we have to say ENOUGH is ENOUGH with all these drugs, chemicals, and toxins we are exposed to at every turn. Especially those we ingest unknowingly through our food. I mean, isn’t that why we have a government organization like the USDA? To protect us from these things?

Finally, it’s my hope that this blog raises awareness for peanut allergy sufferers. That it will make people more cognizant that this isn’t an “I don’t like cilantro so I’ll just say I’m allergic so that restaurants won’t include it in my food or on my plate.” No. This is a life-threatening scenario. Imagine that it is your child who has a peanut allergy and an improperly labeled food may contain traces of peanut that could send your child into anaphylaxis. When you think about it like that, you can see that it’s not something to be trifled with. A peanut allergy or any food allergy for that matter could mean life or death to a child. And, that’s something we should all take very seriously.

This article was reprinted with permission. It was originally published by Focus for Health.

17 Responses to "Why Did Peanut Butter Become An Allergen?"