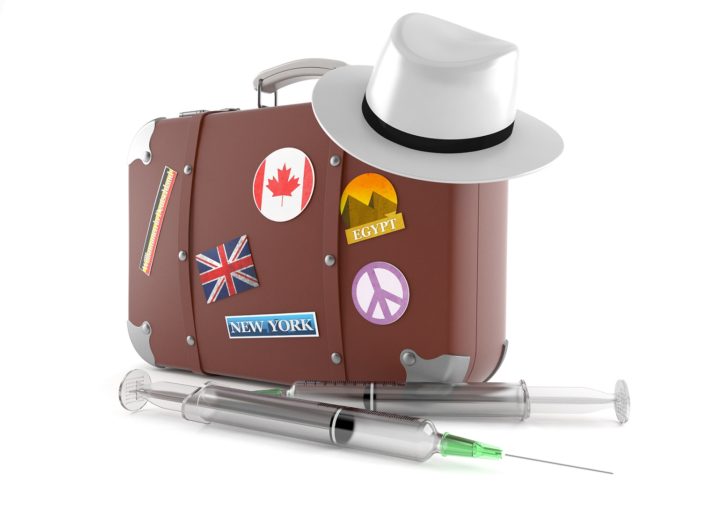 U.S. public health officials commonly advocate vaccinations for Americans traveling abroad, but most foreign countries “recommend” rather than “mandate” vaccinations for visitors. Cholera vaccine, for example, has a limited and transient effectiveness for reducing illness and does not prevent transmission of infection.1 Because of this and the extremely low risk of infection for travelers who practice even minimal safety strategies, cholera vaccinations are no longer required and are only recommended for visitors to countries where there is a perceived higher risk for cholera. Nevertheless, government officials in some countries in Latin America and Africa have been reported to demand that visitors produce a certificate of cholera vaccination at some borders.2

One travel vaccine not subject to individual discretion is the yellow fever vaccine. All African nations require proof of vaccination against yellow fever from all travelers at least ten days prior to arrival. This is true even in countries that do not have reported yellow fever cases, the premise being that they do have mosquitoes capable of transmitting the virus, so infected travelers could introduce the disease. Most Latin American countries also require a certificate of vaccination if the traveler is arriving from another country known for active yellow fever infection. Countries vary in their definitions of what constitutes “infection,” so it is important to know the guidelines before traveling.3

Yellow fever is  an acute viral hemorrhagic disease considered endemic in sub-Saharan Africa and certain tropical South American countries. The yellow fever virus is transmitted to humans by the bite of an Aedes or Haemagogus mosquito, and mosquitoes also become infected when they bite infected humans. The majority of people who get yellow fever recover completely but in about 15 percent of cases, the infection can cause in serious disease, including death.4

Usually, infection follows a three- to six-day incubation period and many people are asymptomatic. When symptoms do appear, they can include sudden fever, chills, headache, back pain, body aches, nausea, vomiting, fatigue, and weakness. Because these symptoms are common to many infectious diseases, yellow fever can be hard to diagnose in its early stages.

There is no specific anti-viral treatment for yellow fever but most people recover with rest, fluids and other supportive care. However, in about 15 percent of cases, the disease progresses to a more toxic form within 24 hours of apparent recovery from the initial symptoms. In those cases, the high fever returns and the disease progresses to cause severe damage to organ systems including the kidneys and the liver, leading to jaundice, the telltale yellowing of the eyes and skin that gives yellow fever its name, as well as dark urine and severe abdominal pain and vomiting. Finally, the individual may experience bleeding from the mouth, nose, eyes, or stomach, and up to 50 percent of those cases die within a week to 10 days.5

The yellow fever vaccine is a live virus vaccine manufactured using a weakened strain of the virus itself, and is cultured via chicken embryos. Although the vaccine is generally promoted as safe and able to confer lifetime immunity without need for a booster, for many years there have been reports of both mild and serious reactions following yellow fever vaccinations.

Yellow fever vaccine was first developed in the mid-20th century and one of the most severe and potentially disabling reactions, which is also common to smallpox, rabies, pertussis, measles, influenza and other vaccines, was brain inflammation (encephalitis).6 The current product information insert for the Sanofi Pasteur yellow fever vaccine states that the vaccine is “contraindicated in infants less than nine months of age due to an increased risk of encephalitis,” and that “age greater than 60 years old and immunosuppression are risk factors for post-vaccinal encephalitis.”7 Other reported neurological complications to yellow fever vaccination noted in the package insert include Guillain-Barre Syndrome (GBS), acute disseminated encephalomyelitis (ADEM) and bulbar palsy.

About a quarter of those who are vaccinated experience “mild” side effects including fever, aches, soreness, and swelling or redness at the injection site that may last up to a week. According to the Centers for Disease Control and Prevention (CDC), less common reactions include a severe allergic reaction to a vaccine component (about 1 person in 55,000), and severe neurological reaction (about one person in 125,000). More than half the people who suffer a life-threatening severe illness with organ failure (about 1 person in 250,000) will die.8

According to the World Health Organization (WHO), the yellow fever vaccine can cause permanent damage to the liver, kidneys, or nervous system in less than one in 100,000 persons vaccinated. There also have been reports of children and adults dying after the live virus vaccine caused a fatal vaccine strain yellow fever infection.9 These severe adverse reactions are more common in those over age 60, and people with an immunodeficiency or thymus disorder.10

As recently as Apr. 3, 2017, yellow fever transmission is reportedly expanding in areas of Brazil, a country not previously considered to be at high risk. Travelers to those areas may now face greater scrutiny of vaccination status.

According to the WHO, the vaccine is not only contraindicated in babies younger than nine months, bu also in pregnant or breastfeeding women, people over age 60, and those with severe egg allergies and serious immunodeficiencies.11 For those with a medical contraindication to vaccination, a physician’s written statement (medical exemption) may be presented in lieu of a vaccination card, but travelers should know that such medical waivers are not honored at all borders.

Similarly, while the WHO ruled in July 2016 that yellow fever vaccinations confer lifetime protection and no boosters are needed, this new ruling also may not be recognized everywhere.12 Travelers without either a written medical exemption or proof of yellow fever vaccination may be vaccinated at the border and detained for up to six days to ensure the visitor is not infected.13

Under the U.S. Constitution, the federal government has long held the power to prevent travelers on ships with yellow fever, cholera or certain other highly contagious serious diseases from disembarking and crossing U.S. borders until they are no longer considered at risk for transmitting the disease. Recently, public health officials have strengthened and expanded “detain and quarantine” authority in ways that are open to interpretation. Vaccine safety and informed consent advocates are concerned this expanded authority could be used by public health officials in the future to detain and quarantine travelers who only have slight symptoms of illness to prevent all unvaccinated individuals from crossing U.S. or state borders.14

International law already sanctions the right of nations to enforce vaccination requirements for travelers wishing to cross their borders. So far this power has been used sparingly by governments, but vaccine laws are changing as public health officials press for expansion of government authority to detain and quarantine unvaccinated travelers.

Currently, vaccine mandates for travelers apply most clearly to those wishing to visit a foreign country requiring proof of vaccination against yellow fever: Vaccinate or stay home.