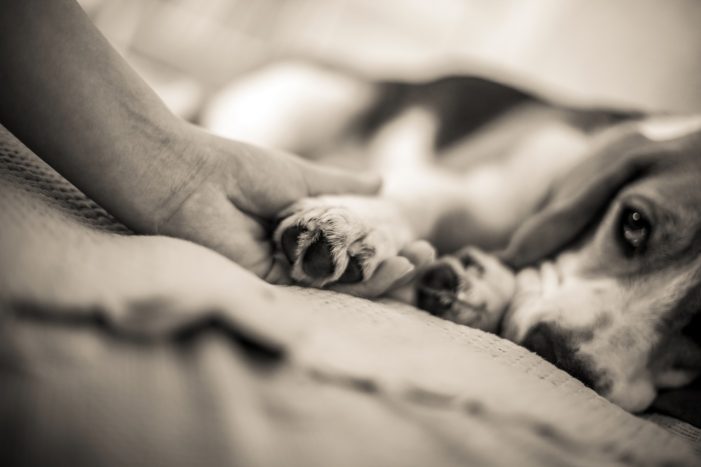 Recently I ran across a sad, maddening news article discussing an increase in autoimmune disorder diagnoses by veterinarians. According to the article:

Similar to humans, autoimmune disorders in dogs can happen suddenly. But what’s different is the condition is just recently being heavily researched in dogs because they’re dying from it.1

The article discusses a seven-year-old dog named Toby who stopped eating regularly, was losing weight and became lethargic to the point of immobility.

Had he recently vaccinated Toby? And how many vaccinations had the dog received in his seven years?

Toby’s health was quickly declining. His veterinarian did a complete blood workup and ultrasound to check for cancer, enlarged organs and other abnormalities. Autoimmune disorders are diagnoses of exclusion, meaning all other possible underlying causes are ruled out first.

And tragically, once the diagnosis is finally made, traditional veterinary medicine has little to offer because from their perspective, “there is no known cause.” Whereas holistic veterinarians have linked vaccines to autoimmune disorders for decades, the conventional veterinary community just can’t seem to get there.

As for poor Toby and other pets like him, according to veterinarian Scott Campbell, who was interviewed for the article:

You have about a seven out of 10 chance that your pet is going to get better, but the reality is that this isn’t going to happen anytime soon. Sometimes multiple blood transfusions are needed, which can be costly.2

The article wraps up by stating that Toby is “pulling through,” though his treatment is far from over. His owner seems resigned to the fact she may never know what caused his illness.

And then there’s this. Veterinarians the news writer spoke with “said testing is getting better and said it’s a learning process where they get more information with every case.” Too bad the learning process apparently doesn’t involve erring on the side of caution and foregoing unnecessary vaccine boosters.

Pets With Autoimmune Disease Are Suspicious for Over-Vaccination

Since this was just a short online news article and video put together by a local television station, I really didn’t expect an in-depth analysis of the rise of autoimmune diseases in pets. However, a glaring omission in the coverage is any mention of Toby’s vaccine status.

Any discussion of a diagnosed autoimmune disease in a pet should include information about vaccinations. We need to know how often the dog has been vaccinated, for what and how recently he received a vaccine(s).

Toby’s owner seems unaware of the connection between vaccines and autoimmune diseases in pets, which suggests her veterinarian hasn’t raised the issue with her, which leads me to believe that if Toby survives, there’s a good chance he’ll be vaccinated again in the future.

That’s not good news for Toby or any animal dealing with an autoimmune disorder.

Researchers Have Long Suspected a Link Between Vaccinations and Autoimmune Disease

Back in 1999, a team of researchers in the Department of Veterinary Pathobiology at Purdue University conducted a series of experimental studies to determine if vaccination of dogs affects the function of their immune system and results in autoimmune disease. In the study introduction, the authors wrote:

There has been a growing concern among dog owners and veterinarians that the high frequency with which dogs are being vaccinated may lead to autoimmune and other immune-mediated disorders (Dodds, 1988; Smith, 1995).
The evidence for this is largely anecdotal and based on case reports. A recent study observed a statistically significant temporal relationship between vaccination and subsequent development of immuno-mediated hemolytic anemia (IMHA) in dogs (Doval and Ciger, 1996).
Although this does not necessarily indicate a causal relationship, it is the strongest evidence to date for vaccine-induced autoimmune disease in the dog.3

The Purdue researchers set out to evaluate whether vaccination at a young age causes alterations in the immune system of dogs, including the production of autoantibodies that could lead to autoimmune disease.

The researchers discovered that the group of vaccinated dogs (but not the unvaccinated group) developed autoantibodies to several crucial, naturally-occurring biochemicals in their own bodies, including albumin, cardiolipin, collagen, cytochrome C, DNA, fibronectin and laminin.

None of the vaccinated dogs developed an autoimmune disease during the 14 weeks of experimental studies; however, they were still under 6 months of age when the study concluded. This is long before autoimmune diseases develop clinical symptoms.

The researchers concluded, “It is likely that genetic and environmental factors will trigger the onset of clinical autoimmune disease in a small percentage of the animals that develop autoantibodies.”4 You can read the full study here.

Fact: Too Many Dogs Are Receiving Too Many Vaccinations

A revved-up (overly-stimulated) immune system, which is both the goal and result of vaccines, can set the stage for disorders in which the immune system mistakes the body’s own organs for foreign invaders, and attacks them. Autoimmune diseases can affect a wide variety of tissues in the body, including blood, joints and muscles, nervous system, thyroid, adrenal glands, kidneys, liver, bowel, reproductive organs, eyes, skin and mucous membranes.

While a safe, individualized vaccination program is important for every pet, research shows that dogs and cats absolutely do not require annual re-vaccinations to keep them protected from disease.

However, even though feline and canine vaccination guidelines have been modified in recent years, too many veterinarians still recommend annual (or even more frequent) re-vaccinations, and too many pet parents comply. According to Dr. Jean Dodds, world-renowned pet healthcare and vaccine expert:

… [T]he truth is that once your dog has completed his puppy series (or kitten series for cats) for the core vaccines, there is a good chance his body will maintain immunity to these diseases for life.

Yet, many well-intentioned people continue to follow the advice of some veterinarians and give their adult dogs and cats annual (or even semi-annual) vaccine boosters. This can result in over-vaccination and a variety of potentially damaging—and in some cases, even life-threatening—adverse reactions (referred to as ‘vaccinosis’).5

Dodds covers the two most common types of vaccines, modified live-virus (MLV) vaccines and killed vaccines, here, where she also lists the dog breeds at highest risk for vaccine-related diseases.

The Canine Vaccination Protocol I Recommend

Veterinary vaccine expert Dr. Ronald Schultz suggests the ideal scenario is to titer pregnant females to determine the exact time maternal antibody levels will fall in their pups and vaccines will be effective to immunize the litter.

This is optimal, because we can completely avoid giving ineffective vaccines, which occurs when puppies still have high levels of maternal antibodies that prevent vaccines from stimulating antibody production. This is a common issue when puppies are vaccinated between five and eight weeks of age.

In many cases, one well-timed vaccine can stimulate adequate protection, but knowing when to give the inoculation is critical. However, for many people who rescue puppies this won’t be possible, so we must guess when maternal antibodies are gone and give two or three inoculations to stimulate antibody production. During this “window of opportunity” for infectious diseases, the puppy’s immune system is vulnerable.

Alternatively, some holistic veterinarians like me are pushing the second booster back to 16 to 18 weeks of age instead of giving a third parvo vaccine. Any physical changes that occur after any vaccine should be immediately addressed. I use homeopathy to counteract any potential vaccine reactions, but there are other methods of detoxification that other practitioners use.

Schultz suggests titering for parvo and distemper from two to four weeks after the last puppy shot to assure the immune system responded adequately. Most holistic vets (including me) prefer to wait and give a rabies vaccine at six months of age.

If the puppy wasn’t titered two to four weeks after her last puppy shot, then titering at one year is advisable, and every three years thereafter. Dodds suggests boosting certain breeds again at 1 year of age, but I would only advise this if a dog’s titer at one year is negligible.

Most traditional veterinarians don’t carry single vaccines (just parvo) or even minimally coupled vaccines (distemper and parvo together), so ask to see the vaccine vial before assuming your pet is only receiving one or two agents at a time. Under no circumstances should a dog with an existing disease or illness, especially an autoimmune disorder, be vaccinated for anything.

Note: This article was reprinted with the author’s permission. It was originally published at www.mercola.com.