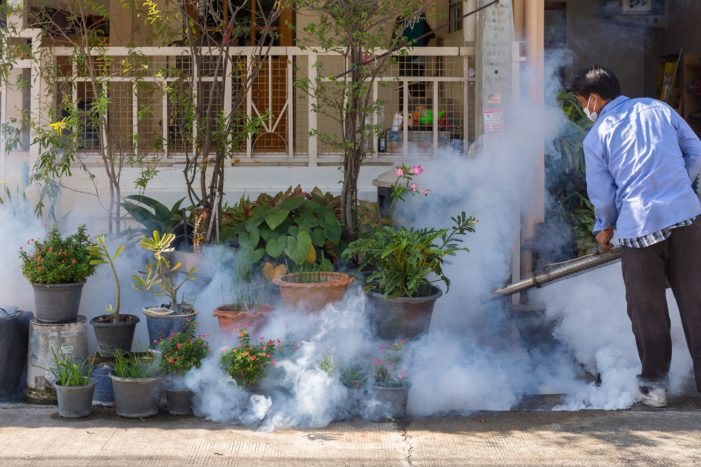 Rachel Carson’s first book, “Under the Sea-Wind,” was a beautiful masterpiece that celebrated the beauty of birds and sea creatures in their natural habitat. It painted a vivid, yet mysterious picture of a never-before-seen world. Though it received early praise, the book never hit stores and ultimately flopped as its release coincided with the bombing of Pearl Harbor.

As formidable as the war itself was the massive outbreaks of typhoid fever faced by soldiers abroad and Americans at home. Crowded and unsanitary living conditions proved to be the perfect breeding ground for body lice, which carried and spread the disease.

Typhus is a horrible condition that begins with a terrible headache and back pain, which leads to vomiting, diarrhea, abdominal rashes and eventually deafness and the loss of limbs.1

But the discovery of dichlorodiphenyltrichloroethane (DDT) as a powerful insecticide offered hope in combating the insufferable disease, while giving man a sense of control over his environment.

Acutely toxic to insects, but seemingly harmless to humans, DDT was sprayed indiscriminately abroad and at home to kill mosquitoes carrying malaria, body lice and eventually agriculture pests. Millions of people were dusted with DDT. It was sprayed in their hair, inside their clothing and even on sleeping babies.

At the time, DDT seemed like a miracle, a gift from God even. DDT and the hydrogen bomb were accredited for winning the Pacific War. Swiss scientist Paul Müller won the Nobel Peace Prize for discovering DDT.

More than 4.5 million homes and 20 million acres of farmland in the southern U.S. were treated with DDT. In 1944, Time Magazine named DDT one of the world’s greatest discoveries, but Carson knew better.

Eventually biologists began seeing evidence that DDT was causing mass bird and fish kills. As a biologist for the Fish and Wildlife Services (FWS), Carson witnessed the evidence firsthand and wanted to write an article warning people about the possible dangers.

She pitched the idea to Reader’s Digest, which promptly turned it down, telling her that housewives who used the chemical daily had no interest in learning the dangers. Carson had no choice but to shelve the idea.

Shortly thereafter, DDT became available to the public and insect-borne diseases appeared subject to man’s control. The chemical was used in countless products including DDT-coated shelf paper and paints and varnishes. DDT even came in a beer can-size cylinder that attached to a lawnmower’s muffler so the hot gas would volatilize and spray across the yard. Meanwhile, Carson was focused on her second book.

Yearning to be the biographer of the ocean, she wrote “The Sea Around Us,” which published in the spring of 1951 and described the intricate beauty and eloquence of life under the sea. It was filled with news from the natural world, describing currents, waves, storm systems and the ocean’s impact on climate. Carson had managed to take a complicated subject and relay it in an almost poetic way that both relaxed and intrigued readers.

Though on edge because the Soviet Union was testing the atomic bomb, Americans cherished Carson’s book, which quickly made The New York Time’s best sellers list. It reached the No. 1 spot, where it remained for 32 straight weeks. “The Sea Around Us” sold 2 million copies and was translated into 30 foreign languages, transforming Carson into a public figure nearly overnight.

Carson’s experience in government made her aware that some saw science as a way to discover new, beautiful things, while others viewed it as a way to wage war or to destroy. The development of the atomic bomb and chemicals like DDT made people feel as if they had mastered the planet. Carson, however, viewed unlimited human ingenuity as dangerous and believed that human arrogance outruns human wisdom.

As the development of weapons of mass destruction continued, Carson realized humans could in fact destroy nature. By 1956, pesticide sales had increased 25 percent. During that time, scientists weren’t studying wildlife or environmental toxicity, but were researching pest control. Carson’s biggest concern wasn’t that pesticides had unintended consequences, but that the effects were totally unknown. It soon became evident pesticide scientists were thinking only about acute toxicity and not the long-term effects.

Biologists learned that pesticides like DDT were bio-accumulating in wildlife and becoming more concentrated as they moved up the food chain. One study found that earthworms were so toxic one year after DDT exposure that they poisoned the robins feasting on them. Even more disturbing was evidence of insect resistance, which meant that birds and fish were needlessly dying while the targeted insects continued to thrive.

From Nature’s Beauty to Death and Destruction

Though busy with life and unmotivated to take on pesticides, Carson realized that everything she cherished as a naturalist was being threatened, so she decided to write a book that would forever change the world. This book would differ vastly from her previous work, as it would focus on the death and destruction caused by pesticides, rather than the planet’s natural beauty.

In 1959, the U.S. government finally admitted the health hazards of nuclear fallout. Carson’s editor insisted that this was the perfect opening to awaken people about the dangers of pesticides. But before she could begin, a lump was discovered in Carson’s breast.

Per the advice of her doctor, Carson underwent a radical mastectomy and was told that it was gone and not cancerous. But a second hard lump soon appeared, prompting her to get a second opinion from a doctor who diagnosed it as cancer. The devastating news gave Carson a newfound sense of urgency. Despite undergoing multiple rounds of painful radiation treatment, she completed her most powerful book yet—“Silent Spring”—in four years.

No Witchcraft. No Enemy. The People Had Done it Themselves

Published on June 16, 1962, the book depicts an eerie image of what it would be like to awaken one morning to silence—with no birds singing and no animals rustling. A quote from the documentary reads:

In the gutter under the eaves, and between the shingles of the roofs, a few patches of white granular powder could be seen: [S]ome weeks earlier this powder had been dropped like snow upon the roofs of the lawns, the fields and the streams. No witchcraft, no enemy action had snuffed out life in this stricken world. The people had done it themselves.

The book sparked major controversy, selling 65,000 copies in less than two weeks; every newspaper in the nation reviewed it. The commotion reached the nation’s capital, with President John F. Kennedy agreeing to look into the side effects of DDT.

To Solve Environmental Contamination, We Must Weigh the Costs Against the Benefits

The chemical industry quickly formed a council to discredit Carson’s book. “Biased,” “half-truths,” and “misinformation” were some of the words used to describe it. Monsanto resorted to scare tactics, running advertisements that depicted a world overrun with infectious disease and famine.

Sadly, during the height of her success, Carson’s cancer continued to spread. Yet, she still managed to share her message, appearing at Senate hearings where she warned about the potential inability to reverse man’s actions. As noted in the documentary:

We have acquired technical skills on a scale undreamed of, even a generation ago. We can do dramatic things, and we can do them quickly. By the time damaging side effects are apparent, it is often too late or impossible to reverse our actions. If we are ever to solve the basic problem of environmental contamination, we must begin to count the many hidden costs of what we’re doing and to weigh them against the gains or advantages.

Carson single-handedly managed to enact a paradigm shift in the way humans view the environment. Some say there is a before and after Rachel Carson in terms of how we think about the environment. Carson believed that we as humans are not separate from this living world, but in fact are a part of it. On Apr. 14, 1964, Carson succumbed to cancer and died at the young age of 56. Some of her ashes were buried next to her mother’s grave, while the remainder were scattered over the ocean.

Carson rightfully questioned the logic and sanity of using such vast amounts of a chemical without knowing much about its ecological and human health impact. Her book triggered a revolution in thinking that gave birth to the modern environmental movement, and the public outcry that resulted from her book eventually led to DDT being banned for agricultural use in the U.S. in 1972.

Unfortunately, DDT was simply replaced with other equally unsafe and untested chemicals—one of them being glyphosate, the active ingredient in Roundup, which today is the most widely used herbicide in the world. Disturbingly, some believe glyphosate may actually be WORSE than DDT, yet the U.S. government has repeatedly failed to take affirmative action to protect us from this pervasive toxin.

Today, we’re also exposed to even vaster amounts of pesticides, and a wider variety of them. Consider this: The very same companies that developed chemical warfare weapons during World War II simply transitioned into agriculture after the war, and many of the same warfare chemicals are now sprayed on our food. The notion that these chemicals are good for humans, the environment and the business of agriculture is a fabricated one.

Carson and her work were so influential that she continues to be attacked by the chemical industry and its aggressors half a century after her death — some have even gone so far to accuse her of murder. In an article published this month by The Daily Beast, vaccine propagandist Dr. Paul Offit writes that Carson’s “crusade against one pesticide cost millions of people their lives.”2

As chief of infectious diseases and director of the Vaccine Education Center at Children’s Hospital of Philadelphia—a position created with an endowment from Merck—Offit has every incentive to defend the chemical industry and attack those trying to protect future generations.

Rather than acknowledge the proven adverse health and environmental effects of DDT, Offit—who has earned millions of dollars on vaccines—claims the ban on DDT “caused tens of millions of people to die from malaria unnecessarily,” most of whom were young children, he adds.

But what about the countless children maimed by DDT? Research shows that girls exposed to DDT before puberty are five times more likely to develop breast cancer.3 DDT, which is harmful even at very low levels, is also linked to male infertility, miscarriages, developmental delays, nervous system and liver damage.

Modern day research proves Carson was right about her suspicions that DDT caused health effects, yet Offit and other chemical industry proponents continue to attack a woman who displayed one of the most remarkable cases of bravery our nation has ever seen. Carson’s legacy is too great to succumb to such evil attacks; however, these attacks should serve as important reminder of the dangers of people like Offit and how little they understand about “science.”

Note: This article was reprinted with the author’s permission. It has been slightly modified from the original article published on Dr. Mercola’s website at www.mercola.com.