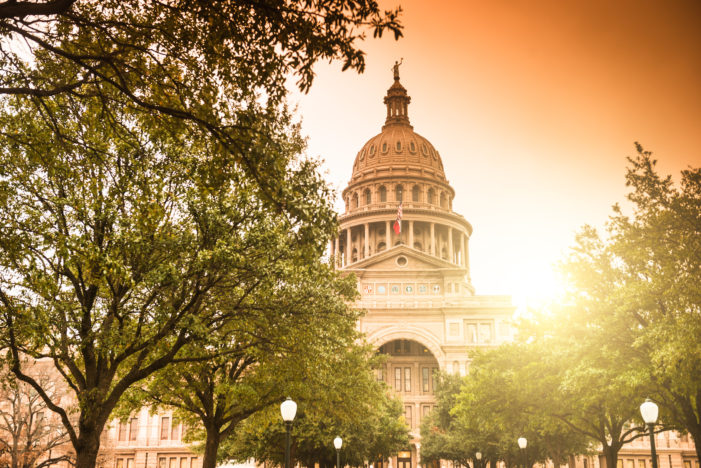 Your right to vaccine exemptions is under attack in many states, from Texas to California, with lawmakers increasingly pushing for mandatory vaccination in the name of public health.

The issue came to a head in 2015, when a measles outbreak that started at Disneyland ignited near hysteria about the number of unvaccinated children in the state of California.

The source of the initial Disney theme park exposure was never identified, yet it was assumed that the measles outbreak (which amounted to a total of only 125 cases, zero deaths and only 17 hospitalizations) was the fault of unvaccinated residents.

Yet, even the U.S. Centers for Disease Control and Prevention (CDC) stated, “Annual attendance at Disney theme parks in California is estimated at 24 million, including many international visitors from countries where measles is endemic.”1

All but One California Vaccine Exemptions Taken Away

Theoretically, if vaccines work as intended then people who are vaccinated should have little risk of contracting measles during an outbreak.

But rather than focus on why some vaccinated individuals still ended up with measles (the vaccines do not always work for a number of reasons), the media and regulators launched efforts to take away residents’ right to vaccine choice.

In 2015, California quickly went from a state with a personal belief exemption that protected vaccine choice to one with one of the strictest vaccine policies in the U.S. California is only one of three states in the U.S. that has eliminated the personal belief exemption for conscientious, philosophical or religious beliefs and now only allows a medical vaccine exemption that must be written by a medical doctor or other state-designated medical worker.

Unless you can find a medical doctor to write your child a medical exemption, your child cannot go to day care or attend public or private schools in California without getting multiple doses of nine or 10 state-mandated vaccines (polio, diphtheria, pertussis, tetanus, haemophilus influenza B [or day care], hepatitis B, measles, mumps, rubella and varicella zoster [chickenpox]).

If you refuse even one federally recommended dose of those vaccines, you are forced to homeschool your child. Further, not only Californians’ rights were affected by the Disneyland measles outbreak reported in 2015. Barbara Loe Fisher, president and co-founder of the National Vaccine Information Center (NVIC), said:

One hundred vaccine-related bills were introduced in this country in January and February of 2015 as a result of this mass hysteria about measles’ cases associated with Disneyland.

In Texas, 20 bills were introduced. In 11 states, the personal belief exemption was attacked for removal.

Texas is one of 16 states that provides a vaccine exemptions for conscientious, philosophical and/or religious beliefs, but that may soon change.

Seven bills have already been introduced in Texas and one of them proposes to eliminate language about “conscientious” and “religious” belief from the vaccine law and change it to “non-medical” to focus on the authority of medical doctors and to minimize the importance of the human right to exercise freedom of conscience and religious belief when making medical decisions for minor children that involve risk-taking, including vaccine risk taking.

Other bills would require parents filing a conscientious belief exemption to complete an “education module” or receive counseling from a health care practitioner, while others make it harder for Texans to avoid having their vaccination status be electronically monitored by public health officials without express informed consent.

The number of students in kindergarten through 12th grade in Texas who filed a conscientious belief exemption for at least one state mandated vaccination during the last school year, reportedly has increased 19-fold since 2003.2

This still only amounts to less than one percent of enrolled students, but Texas lawmakers have filed bills aimed at lowering the number of children who are exempted from vaccinations for non-medical reasons. As reported by American-Statesman:3

[State Rep. Donna] Howard has filed bills to be considered next year that would require students to opt-out of the state’s immunization registry called ImmTrac rather than opt-in and physicians to counsel parents on vaccinations before they obtain an exemption.

A similar bill filed last year did not move forward, and some, including the Home School Legal Defense Association, expressed concerns that such bills could harm parental rights.

It remains to be seen whether the bills will move forward next year. What is clear is that, one by one, more vaccine exemptions are being removed from state public health laws, while society moves in favor of mandatory vaccinations using a flawed, and sometimes fatal, one-size-fits-all schedule.

Why Vaccine Exemptions Must Be Protected

It’s incredibly important that people retain the right to choose what is, or is not, injected into their bodies. The fact is, vaccines are tolerated by some people and devastating to others and doctors cannot predict who will be harmed.

The Institute of Medicine again acknowledged in a 2013 published report that there is individual susceptibility to vaccine reactions. Today we know that some children, like those with chronic diseases or mitochondrial disorders, are at increased risk.

Unfortunately, efforts aren’t being made to identify these susceptible children to prevent them from serious vaccine reactions that can lead to brain or immune system damage or even death.

Infants that responded to the rotavirus vaccine had a higher diversity of microbes in their gut, as well as more microbes from the Proteobacteria group, than infants who did not mount the expected immune response.4

Epigenetic science, which now tells us that our genes are NOT our destiny, is another variable in vaccine safety, because no one knows how vaccines affect your genes (and it’s likely different in every person).

Part of the problem is that once you start to epigenetically tinker with the infant immune system, you are basically depositing what Dr. Suzanne Humphries, author of “Dissolving Illusions: Disease, Vaccines, and the Forgotten History,” refers to as “little cluster bombs” that will eventually “explode into a big problem.”

As an example, she cited a study by Nikolaj Orntoft, in which African girls were injected with a tetanus vaccine to see which genes might be upregulated or downregulated (basically “turned on” or “turned off”). What they found is that there’s really no way to predict which genes will be affected.

So not only will each individual have a unique response to any given vaccine based on their age, current health status and microbial makeup, but we’re also epigenetically predisposed to respond differently in terms of the side effects we might develop.

You can see, then, how vaccine mandates may turn out to be health disasters for some people.

What About Herd Immunity?

In the debate over vaccine exemptions, one of the arguments commonly used in favor of increased vaccination is that of herd immunity. It’s necessary for the vast majority of a population to become vaccinated, officials say, for the betterment of the group, but there are flaws with this assumption.

Many people believe that once you receive a vaccine, you’re protected from that disease. This is a misconception. Vaccines do not confer the same kind of long-lasting immunity that is obtained from experiencing and recovering from the natural disease.

This is why booster shots are necessary, as vaccine-induced immunity eventually wanes. The vaccine simply cannot provide longer lasting immunity like that provided by a naturally acquired infection. So, what many people don’t realize is that there is such a thing as natural herd immunity. However, vaccines cannot provide this.

As an example, most Americans born before 1957 experienced measles and have stronger, more complete and longer lasting naturally acquired immunity, which allowed women to pass antibodies on to their babies to protect them from measles during the first year of life.

There Are More Questions Than Answers When It Comes to Vaccinations

From my point of view, there can be little doubt that we need to review the safety and effectiveness of the current vaccination program in the U.S. This review needs to include methodologically sound investigative studies that are not compromised by conflicts of interest within industry and government.

There are simply more questions than answers regarding vaccination, and scientists have only scratched the surface of the complex changes that occur when you artificially manipulate the human immune system. Consider, for instance, the fact that vaccines cannot provide 100 percent protection from any given disease. Vaccines are imperfect, and imperfect vaccines may actually trigger the evolution of more severe disease.6

“Vaccines rarely provide full protection from disease,” Andrew Read, PhD, evolutionary biologist at Penn State University, and colleagues wrote in one study, and those that are imperfect or “leaky” may protect the host from succumbing to the disease while still allowing them to shed the virus into the community.

Ordinarily, a particularly lethal or “hot” virus is self-limiting because it will kill those it infects relatively quickly, before they have a chance to spread the virus to those around them. With leaky vaccines, this is no longer the case, as infected hosts may spread the lethal virus for weeksor more.

In 2013, the U.S. Food and Drug Administration (FDA) discovered that while the whooping cough (pertussis) vaccine may reduce symptoms in those who are vaccinated, the pertussis vaccine does not prevent infection and transmission of the disease. In fact, you can get a series of pertussis shots and still become an asymptomatic carrier who is contagious and can spread the disease to others without even knowing it. That study effectively shattered the long-held illusion of vaccine-induced herd immunity.

Now public health and medical trade groups are pressuring legislators to pass laws that would not only eliminate non-medical religious and conscientious belief vaccine exemptions for children to attend school, but also would require children to get every one of the 69 doses of 16 federally recommended vaccines—unless a parent can get a medical vaccine exemption from a doctor.

This vaccine dragnet, which is already being applied to health care workers, is also pulling in childcare workers and teachers as proposed new vaccine laws threaten them with loss of employment if they cannot find a doctor to write a medical vaccine exemption.

Zealously pursuing a 99.99 percent vaccination rate and using very small groups of immune compromised individuals as an excuse to eliminate all non-medical vaccine exemptions, liability-free doctors want permission from lawmakers to blackmail virtually every American into playing vaccine roulette. And they want to do this in the absence of sound vaccine safety science, even for those potentially at higher risk for suffering vaccine harm.

The Difference Between Vaccine Requirements and Federal Vaccine Recommendations

In case you’re wondering why every state has its own vaccine requirements, it’s because the CDC makes vaccine policy recommendations on a national level, but state health departments are the ones that make and enforce vaccine mandates. It’s important to be aware of the vaccine requirements and exemptions in your particular state, as not all require every federally recommended vaccine as a condition for work and school. NVIC further explained:8

By the early 1980s, the CDC recommended and most states mandated that children get 23 doses of seven vaccines (polio, diphtheria, tetanus, pertussis, measles, mumps [and] rubella) to attend kindergarten.

While vaccine policymakers in the American Academy of Pediatrics (AAP) and the Centers for Disease Control (CDC) make vaccine recommendations for children and adults, the bottom line is that your state may not require all federally recommended vaccines as a condition of employment, and school or daycare attendance.

As is currently ongoing in Texas, increased attacks on vaccine choice and vaccine exemptions are occurring, which is why taking action to protect your right to personal liberty and informed consent.