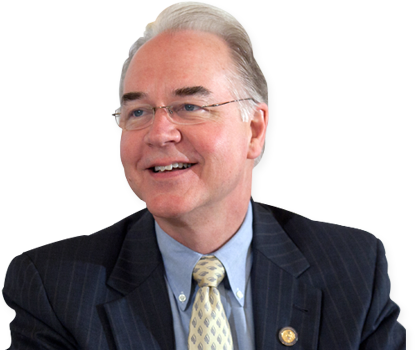 U.S. Representative Tom Price has been nominated for the position of Secretary of the Department of Health and Human Services (HHS) by President-elect Donald Trump. The six-term Republican congressman from Georgia’s 6th District currently serves as Chairman of the House Budget Committee.1

If confirmed by the U.S. Senate, Rep. Price, 62, would lead a department that has an annual operating budget of more than $1 trillion and oversees a number of key health regulatory agencies, including the Food and Drug Administration (FDA), the Centers for Disease Control and Prevention (CDC), and the National Institutes of Health (NIH).2 3 4

Rep. Price is an orthopedic surgeon.1 5 He is a member of the GOP Doctors Caucus in the House—a group of physicians in the House that has aggressively opposed the Affordable Care Act (ACA), also known as Obamacare.6  He is a strong proponent of individual autonomy, which includes the right of patients to make independent choices about their health care options, with minimal intervention by government. In an interview with ThinkProgress, Rep. Price said:

Rep. Price is also a member of the Association of American Physicians and Surgeons (AAPS), which supports informed consent to medical risk taking and opposes mandatory vaccination. The group has called for a moratorium on all government mandated vaccines.8 9 10

AAPS Executive Director Jane Orient, MD, stated in a press release issued by the organization that,

“Our children face the possibility of death or serious long-term adverse effects from mandated vaccines that aren’t necessary or that have very limited benefits.10

It’s obscene to threaten to seize a child just because his parents refuse medical treatment that is obviously unnecessary and perhaps even dangerous. AAPS believes that parents, with the advice of their doctors, should make decisions about their children’s medical care—not government bureaucrats.10

Rep. Price has said that, “when patients, and their families, and their doctors are not allowed to independently decide what care should be provided, we lose more than our healthcare system. We lose our morality and our freedom.”8