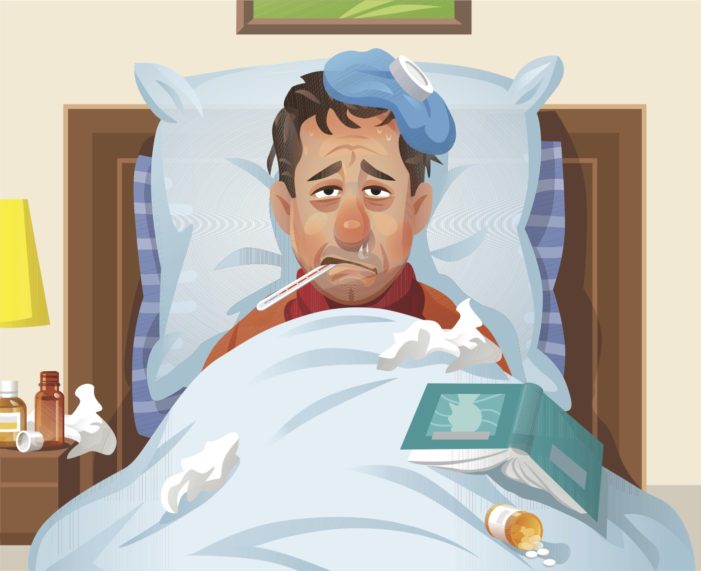 It’s that time of the year again when drug companies, doctors, government officials and media conduct a national advertising campaign to sell flu shots to every American.1 2 3 You can’t pass by a pharmacy,4 enter a supermarket,5 shop in a “big box” store6 or catch a plane7 without seeing the “flu shots for sale” signs trolling for customers.

The pharmaceutical industry is cutting out the MD middleman and going straight for the gold in places where we shop for toothpaste, clothes and food.8 Even on the evening news, flu shot commercials are becoming as frequent as political campaign ads.

Up until the year 2000, flu shots were not recommended for everyone. Back in the 1990’s, doctors were telling seniors over age 65 and younger people with chronic illness to get vaccinated.9

No Flu Shot? No Job or Daycare!

Now, doctors at the Centers for Disease Control and Prevention (CDC) tell every man, woman and child over six months old they need an annual flu shot10 and it is okay for health care workers to be fired if they don’t get vaccinated every year.11 12 13 14

In the states of Connecticut and New Jersey, there are mandates in place that force parents to give their six-month old babies a flu vaccine or be banned from daycare.16 This, as state health department officials join with medical trade association lobbyists in many states to severely restrict or eliminate medical, religious and conscientious belief vaccine exemptions for all children.16 17

The product liability protection that Congress gave doctors and drug companies under the 1986 National Childhood Vaccine Injury Act, which the U.S. Supreme Court expanded in 2011, has absolved vaccine manufacturers from accountability in civil court for vaccine injuries and deaths.18 To make matters worse, the public-private business partnership between government and the pharmaceutical industry that Congress created after Sept. 11, 200119 20 is paying big dividends for liability free drug companies and liability free doctors selling flu shots to more than 325 million Americans.

It doesn’t matter if 80 to 95 percent of all flu-like illness during the flu season is caused by other viruses and bacteria and not type A or B influenza strains contained in flu vaccines,21 22 or that the vaccines don’t prevent influenza most of the time. In December 2015, CDC officials publicly admitted that flu vaccines are only on average 50 to 60 percent effective at preventing lab confirmed influenza requiring medical care in most years.

In fact, a CDC analysis of flu vaccine effectiveness for the past decade—from 2005 to 2015—demonstrated that more than half the time, seasonal flu shots are less than 50 percent effective depending upon the age of the person who got vaccinated and what kind of vaccine was given. In the 2004-2005 flu season, the influenza vaccine failed to protect vaccinated persons 90 percent of the time and in the 2014-2015 season, it failed to prevent influenza about 80 percent of the time.23

The selling of influenza vaccine has a lot to do with selling big morbidity and mortality numbers. So how bad were those numbers in the late 20th century to justify government taking a “no exceptions” cradle to the grave approach to flu shots for every American in the 21st century?

The first experimental influenza vaccines were given to soldiers in World War II. It wasn’t until the 1957-58 and 1968-69 influenza pandemics that the vaccine was marketed to civilians.24 Between 1970 and 2000, the trivalent influenza vaccine containing two strains of type A influenza and one strain of type B influenza was primarily recommended for the elderly. That is because respiratory infections, especially with pneumonia complications, have always been a leading cause of death for people at the end of their life span.25

There was only one deadly influenza pandemic in the last 100 years that killed the young and healthy in great numbers and that was the 1918 Spanish Flu. It turns out that bacterial pneumonia is what killed most people, young or old, in the 1918 pandemic. Today, antibiotics would have prevented most of those deaths.26

But just how bad is seasonal influenza today?

The CDC has been telling the public for more than a decade that there are some 200,000 estimated hospitalizations and 36,000 estimated deaths from influenza in the U.S. every year.27

But are those figures accurate? Well, it all depends upon use of the word “estimate.” The U.S. Agency for Healthcare Research and Quality reported that, in 2004, there were about 37,000 Americans hospitalized for either influenza or another illness in addition to influenza, and patients over age 85 were twice as likely to die.28

In 2003, CDC employees also used a convoluted statistical modeling scheme to “estimate” that 36,000 people die from influenza in the U.S. every year. Again, they counted not just influenza death cases but also threw in other respiratory, circulatory, cardiac and pulmonary deaths they thought might have been associated with influenza.31

The CDC does not require states to “report individual seasonal flu cases or deaths of people older than 18 years of age.”32

That’s right—the CDC is not actually asking for the information they need to accurately assess influenza morbidity and mortality in the U.S.

It would be funny if people weren’t actually losing their jobs or being denied daycare or becoming paralyzed33 34 by “no exceptions” flu shot policies and laws.

Doctors at the CDC quietly admit on their website that the “CDC does not know exactly how many people die from seasonal flu each year.”35 Having gotten that “universal” cradle to the grave flu shot recommendation firmly in place so states and employers could start mandating, they are backing away from the 36,000 influenza death figure. CDC now says that “only 8.5 percent of all pneumonia and influenza deaths and only 2.1 percent of all respiratory and circulatory deaths” are influenza related.

While drug companies with no legal accountability are making big profits from government marketed and mandated influenza vaccines, when children and adults in America get hurt from dutifully rolling up their sleeves for that annual flu shot, most are left on their own to pick up the pieces of their lives and pay for it, too.39 With Big Pharma’s free pass on liability, federal government officials have been able to turn the federal vaccine injury compensation system (VICP) into a cruel joke.40

The big question is: How long are Americans going to tolerate being forced to buy and use a vaccine every single year, which carries a risk of injury or death and fails to work most of the time, to theoretically prevent an infection that most people recover from without complications?