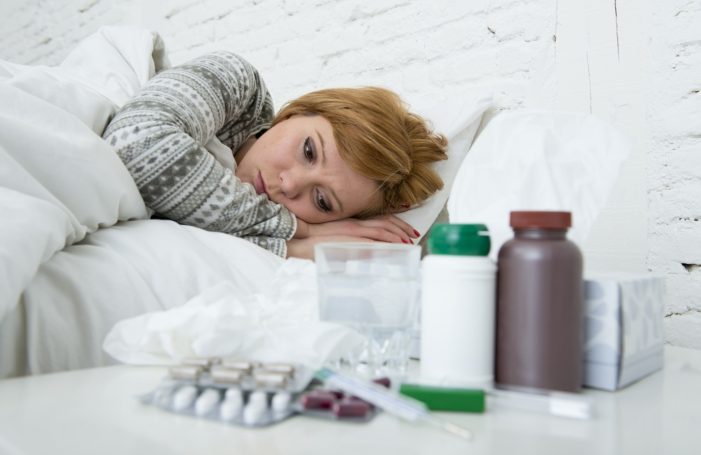 Americans have never been big fans of flu shots. During the 2009 “swine flu” influenza A pandemic, only about 40 percent of adults bothered to roll up their sleeves.1 In the 2014-2015 flu season, flu vaccine rates were still just 47 percent for adults but pediatricians had vaccinated 75 percent of children under two years old.2

Perhaps it is because parents are being thrown out of pediatricians’ offices if they don’t give their children every federally recommended vaccine—or maybe it is just because adults can talk about how they felt after getting vaccinated and infants and children under age two cannot. How many times has someone told you: “The year I got a flu shot is the only year I got sick” or maybe you learned that the hard way yourself after getting vaccinated.

Doctors insist that just because we get sick with a fever, headache, body aches and a terrible cough that hangs on for weeks after getting vaccinated, it doesn’t mean the vaccine made us sick. They say it was just a “coincidence” because correlation does not equal causation.3 4

Well, that may be true some of the time, but earlier this year the Centers for Disease Control and Prevention (CDC) admitted that flu shots don’t prevent influenza most of the time.5 In fact, studies show that a history of seasonal flu shots can even make people more susceptible to getting sick with a fever, headache, body aches and a terrible cough that hangs on for weeks!6 But just like with pertussis infections, a lot of people also get and transmit influenza infections without showing any symptoms at all.7 8 9

For years, the CDC has been promoting the notion that flu shots are between 70 and 90 percent effective in preventing influenza10 and everybody needs to get vaccinated because type A and type B influenza causes more than 200,000 hospitalizations and 36,000 deaths in the U.S. every year.11

Here are the facts:

FACT: There were about 2.5 million deaths in the U.S. in 2013, in a population of about 315 million people, and most deaths were from heart disease, cancer and other chronic diseases. About 57,000 deaths were categorized “influenza and pneumonia” with the majority occurring in people over age 65.12 Because pneumonia is not only a complication of influenza, but is also a complication of many other viral and bacterial respiratory infections, the breakdown for 2013 was about 3,700 influenza-classified deaths and 53,000 pneumonia deaths in all age groups, with 20 influenza deaths in infants under age one.13

FACT: A federal health agency reported that, in 2004, there were about 37,000 Americans hospitalized for influenza and patients over age 85 were twice as likely to die from the infection.4 The figure of 37,000 influenza hospitalizations is five times less than the number of 200,000 the CDC has been using. That is because CDC officials came up with their influenza hospitalization “guesstimate” by counting a lot of hospitalized people, who also had pneumonia, respiratory and circulatory illnesses, which they counted as probably associated with influenza.15 16

FACT: Influenza-like-illness (ILI) symptoms, such as fever, sore throat, congestion, cough, body aches and fatigue that are severe enough to prompt a trip to the doctor, rarely turn out to be actual lab confirmed type A or B influenza infection. In the past two years, when the CDC tested specimens of influenza-like-illness cases, only between three percent and 18 percent were positive for type A or B influenza.17 18 Most of the respiratory illness cases making people sick enough to seek medical care during the flu season were caused by other viruses or bacteria.

So just how effective IS that flu shot your doctor tells you to get every year?19

After studying influenza infections during 2012-2013 in the states of Michigan, Wisconsin, Washington and Pennsylvania, U.S. public health officials reported in 2015 that flu vaccine effectiveness was quite low: between 39 percent and 66 percent, depending upon the influenza strain20

Here is what else they learned:

In January 2016, U.S. government officials finally publicly admitted that flu vaccines are only 50 to 60 percent effective at preventing lab confirmed influenza requiring medical care in most years.21 In fact, a CDC analysis of flu vaccine effectiveness for the past decade—from 2005 to 2015—demonstrated that more than half the time, seasonal flu shots are less than 50 percent effective!22

The sad part is that public health doctors have known since the first influenza vaccine was licensed in 1945, that influenza vaccines don’t work very well.25 26 27 But that did not stop them from recommending in 2010 that every child and adult should get an annual flu shot starting at six months old and through the last year of life.28 29 30

This is being done, despite the fact that influenza vaccine reactions causing inflammation of the nerves, known as Guillain Barre Syndrome, and other chronic health problems are the number one most compensated vaccine injuries for adults in the federal vaccine injury compensation program,31 which has awarded more than 3.3 billion dollars to victims of government recommended vaccines under the National Childhood Vaccine Injury Act of 1986.32

This is being done, despite the fact that scientists know that there are several hundred types of type A, B, and C influenza viruses that are constantly recombining and creating new virus strains.33 34 Public health officials admit they still do not know how to accurately predict when and how influenza viruses will mutate and which strains will be dominant in a given flu season, and they still don’t know how to measure immunity and long term protection.35 36

In 2011, Michigan epidemiologists investigated influenza infections in healthy men and women and concluded that simply measuring the number of antibodies in the blood should not be used as a surrogate for vaccine efficacy because antibody titers “may not protect.”37 In 2013, the CDC confirmed that high antibody titers, especially in seniors and young children, does not predict flu vaccine effectiveness.38

If doctors have been using an inaccurate blood test to measure immunity and vaccine efficacy for 70 years, what does that say about the accuracy of 70 years of vaccine studies?

4 Responses to "CDC Admits Flu Shots Fail Half the Time"