Mumps Being Spread by and Among Vaccinated People 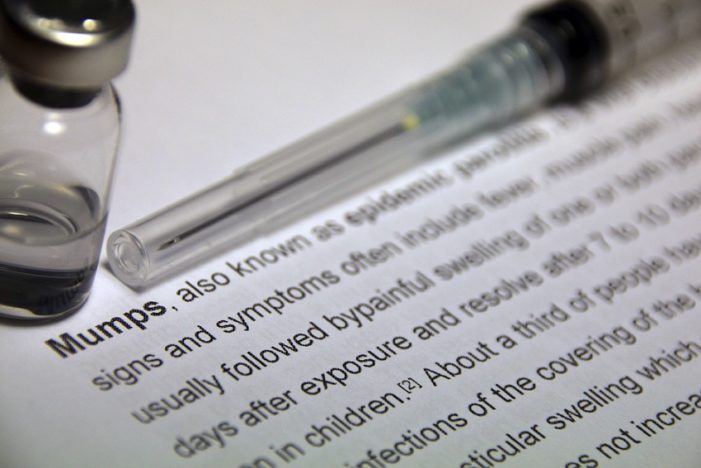 Even ineffective vaccines allow vaccine makers to make a mint. One of the most obvious vaccine failures is the mumps vaccine (part of the measles, mumps, rubella, aka MMR).

Again and again, outbreaks among vaccinated populations occur, yet rarely is the truth of the situation addressed, namely the fact that the vaccine is ineffective and doesn’t work as advertised.

In 2010, two virologists filed a federal lawsuit against Merck, their former employer, alleging the vaccine maker engaged in improper testing and data falsification to artificially inflate the efficacy rating of their mumps vaccine.

For details on how they allegedly pulled this off, read Dr. Suzanne Humphries’ excellent summary,2 which explains in layman’s terms how the tests were manipulated.

Just about every media outlet reported the lawsuit, and the hundreds of millions of dollars Merck was said to have defrauded from the U.S. government by selling a vaccine of questionable effectiveness.

As reported by Reuters3 last year, Merck’s behavior in and of itself suggests they’re trying to cover up fraud:

Attorneys at Constantine Cannon, who represent the scientists, asked U.S. Magistrate Judge Lynne Sitarski of the Eastern District of Pennsylvania to compel Merck to respond to their discovery request, which asks the company to give the efficacy of the vaccine as a percentage.

Instead of answering the question, the letter said, Merck has been consistently evasive, using ‘cut-and-paste’ answers saying it cannot run a new clinical trial to determine the current efficacy, and providing only data from 50 years ago.

‘Merck should not be permitted to raise as one of its principal defenses that its vaccine has a high efficacy, which is accurately represented on the product’s label, but then refuse to answer what it claims that efficacy actually is,’ the letter said.

So why are people still surprised when mumps outbreaks occur? And why are the unvaccinated still blamed for most disease outbreaks, even when most of the infected are vaccinated?

Vaccinated People are Spreading the Mumps

Recently, 41 students at Harvard University came down with mumps and, according to the Public Health department in Cambridge, every single one of those students had been vaccinated.4

Four other campuses in Boston are also starting to see cases, as have four universities in Indiana. About 13 cases of mumps have also cropped up in California.

One ridiculous explanation offered by Dr. Amesh Adalja, an infectious-disease specialist at the University of Pittsburgh Medical Center’s Center for Health Security, is that the vaccine only works if the exposure to the virus is low; it can’t be expected to work if there are high amounts of exposure, such as in dorms.

“The exposure that they have to mumps is so high in these situations that it overcomes the ability of the vaccine to protect them,” Adalja told Live Science. “It may be that, in these special situations, a much higher level of antibodies [against mumps] is needed to keep the virus at bay.”5

In 2009, more than 1,000 people in New Jersey and New York contracted the disease. At the time, questions arose about the effectiveness of the vaccine because 77 percent of those sickened were vaccinated.

A similar scenario occurred in 2006, when mumps infected more than 6,500 people in the U.S. Most of those cases also occurred among the vaccinated population, primarily among college students who had received two doses of MMR vaccine.

Now, if a vaccine is indeed highly effective, and avoiding the disease in question is worth the risk of the potential side effects from the vaccine, then many people would conclude that the vaccine’s benefits outweigh the risks.

However, if the vaccine is ineffective, and/or if the disease doesn’t pose a great threat to begin with, then the vaccine may indeed pose an unacceptable risk. This is particularly true if the vaccine has been linked to serious side effects.

Unfortunately, that’s the case with the MMR vaccine, which has been linked to at least 98 deaths and 694 disabilities between 2003 and 2015. Considering the fact that only 1 to 10 percent of vaccine reactions are ever reported, those numbers could actually be closer to 980 deaths and 6,940 disabilities.

Meanwhile, death from mumps is “exceedingly rare” according to the CDC,6 and no one has died from mumps during any of the recent outbreaks.

Note: This article was reprinted with the author’s permission. It was excerpted from the article “Mumps Being Spread by and Among Vaccinated People,” originally published on Dr. Mercola’s website at www.mercola.com.

5 Responses to "Mumps Being Spread by and Among Vaccinated People"