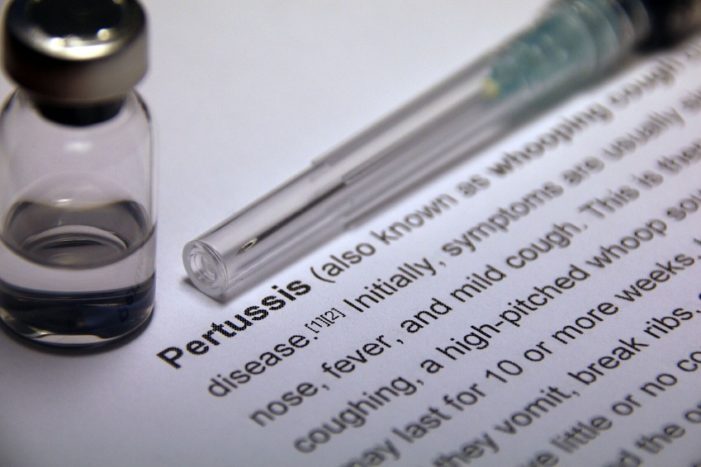 The following is the first half of a two-part article on pertussis. Click here to read the second half of the article.

For the past decade, Americans have been subjected to dire warnings that B. pertussis whooping cough cases are on the rise and it is the fault of parents who don’t vaccinate their children.1 2 3 That myth actually goes back to the early 1980’s,4 when parents of DPT vaccine injured children in the U.S. were asking for a safer pertussis vaccine while, at the same time, discovering that whole cell pertussis vaccine in DPT shots did not prevent infection5 and vaccine immunity lasted for only two to five years.6 7

The same old excuse—“it’s the parent’s fault”—is being invoked again in the 21st century by forced vaccination proponents who want to eliminate vaccine exemptions, 8 9 10 11 just as another generation of parents are discovering that acellular pertussis vaccine in DTaP shots also does not prevent infection 12 13 14 and vaccine immunity is waning, lasting at best for two to five years.15 16 17

Time to Dispel Myths and Lies About Pertussis and Pertussis Vaccines

What’s old is new again. And it is time to dispel the myths and lies being told about pertussis and pertussis vaccines.

Now, here is the rest of the story in more detail:

Child pertussis vaccination rates in the U.S. have remained very, very high for the past 35 years.18 Consistently, more than 94% of kindergarten children have had four to five pertussis-containing shots either in whole cell DPT or acellular DTaP vaccines.19 There is a 94% pertussis vaccination rate for children under 35 months old20 and, today, 88% of teenagers attending high school have gotten a sixth pertussis booster shot.21

That’s a lot of pertussis vaccination going on in America for a long time among children of all ages, many of whom are now adults in their 20s, 30s and 40s. So why are public health officials reporting that large numbers of fully vaccinated pre-schoolers in Florida,22 and fully vaccinated teenagers in California,23 and fully vaccinated sisters and brothers of newborn infants are spreading pertussis whooping cough—24even though most have gotten every pertussis shot recommended by the CDC?

Before we examine why the experts are fighting with each other about the answer to that question, let’s do a quick review of the history of pertussis and pertussis vaccine.

B. pertussis whooping cough has been around since at least the 16th century, and it can be especially serious for babies who cannot breathe when the sticky mucous produced by the gram negative bacteria clogs their tiny airways.25 26 The first crude whole cell pertussis vaccine was licensed in 1914,27 but was not given widely to children until after 1949, when it was combined with diphtheria and tetanus vaccines into the DPT shot28 and used until 1996, when a less reactive DTaP vaccine was licensed in the U.S.29

By 2014, public health officials reported that 86% of the world’s children had gotten at least three pertussis shots,30 but estimate there are still about 16 million pertussis cases and 195,000 pertussis-related deaths every year globally.31

But what about deaths in the U.S. from pertussis whooping cough?

In our country, deaths from pertussis infections dropped by more than 75% between 1922 and 1948, the yearbefore the DPT vaccine was licensed. In 1948, the mortality rate was less than 1 pertussis death per 100,000 persons and would never be higher than that again.32 33 In 2013, there were about 29,000 reported pertussis cases and 13 pertussis-related deaths in America, with nine of those deaths in infants under age one.34

However, reported numbers of pertussis cases do not match the total number of actual cases of pertussis that are happening in America. Most pertussis cases, like most vaccine reactions, are not being diagnosed or reported by doctors to the government.35 Public health officials admit they still don’t have reliable lab tests to measure pertussis immunity and can’t agree about how to diagnose pertussis when infected people, especially vaccinated people, show up in doctor’s offices with mild symptoms.36 37 38

Millions of U.S. Pertussis Cases in Vaccinated Persons Not Identified or Reported

But what public health officials have known for a long time—and do not publicly talk about—is that millions of vaccinated children and adults living in the U.S. get pertussis whooping cough and are never identified.39 40 41 42 That’s right: there are millions of pertussis infections going on in America among vaccinated people but doctors are not diagnosing or reporting them.

In fact, whether you or your child have been vaccinated or not, you can get a silent asymptomatic pertussis infection and transmit it to someone else without even knowing it. 43 44 45 That child or adult sitting next to you in the bus, classroom, movie theater or doctor’s office, who has a little cough or no cough at all, could be infected with B. pertussis whooping cough, even though he or she has gotten every federally recommended dose of pertussis vaccine.